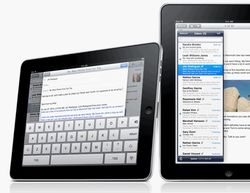 If you believe some pundits and fanboys, the coming of the iPad and the new market for Tablet PCs that it is expected to open up will revolutionize how I use a computer. It will change the way I browse the Internet, do email and make coffee in the mornings. Here are a few choice marketing promises from the Apple website about the iPad:

"See and touch your email in ways you never could before."
"Lets you see web pages as they were meant to be seen."
"Feel completely immersed in whatever you’re watching."

Now take a deep breath and let's take a look at reality. The iPad is not a mobile device, it's too large for that. And it's not meant to be used at a desk (ie – at work for most people) since it would be too awkward for that (or you could get the external keyboard and mouse, but then it's just a glorified monitor). So if it's not good on the go and not good in the office, what does that leave? Two places: the couch and the bed.

What does this mean for how the iPad and tablets may change the way we use the computer then? Actually, not much – but that's not to say they won't matter or have an impact. Ironically, I believe that it will be "mainstream" media that realizes the biggest transformation. Here are three of the biggest shifts in media that I believe the iPad and Tablet PCs will bring as they hit the market in the next several months: