A Downloadable Script To Introduce Rohit

Rohit Bhargava is on a mission to inspire more non-obvious thinking in the world. He is the #1 WSJ bestselling author of eight books on marketing, trends and how to create a more diverse and inclusive world.

Rohit Bhargava is on a mission to inspire more non-obvious thinking in the world. He is the #1 WSJ bestselling author of eight books on marketing, trends and how to create a more diverse and inclusive world.

A Reasonably Short Bio (Under 400 Characters)

Rohit Bhargava is on a mission to inspire more non-obvious thinking in the world. He is the #1 WSJ bestselling author of eight books on marketing, trends and how to create a more diverse and inclusive world. As an entrepreneur, Rohit is also the founder of two successful businesses: the Non-Obvious Company and Ideapress Publishing, a leading independent publisher of brilliant non-fiction books.

The Suitably Impressive Full Bio (Use This One If You Have Space!)

Rohit Bhargava is on a mission to inspire more non-obvious thinking in the world. He is a leading authority on marketing, trends and innovation. Prior to becoming an entrepreneur and starting the Non-Obvious Company and Ideapress Publishing, he previously spent over 15 years advising large brands on marketing strategy at two respected global advertising agencies: Leo Burnett and Ogilvy. Rohit is widely considered one of the most entertaining and original keynote speakers on marketing disruption and innovation in the world. He is the #1 Wall Street Journal bestselling author of eight books on topics as wide ranging as the future of business, building a human brand with personality, and how to create a more diverse and inclusive world. He has been invited to deliver sold-out keynotes and workshops to change the way teams and leaders think at the World Bank, NASA, Intel, LinkedIn, American Express, Under Armour, Univision, Disney and hundreds of other well-known organizations. Rohit has also taught popular courses on marketing and storytelling at Georgetown University in Washington DC and writes a monthly column on trends for GQ magazine in Brazil. Rohit lives in the Washington DC area, is married and is a proud dad of two boys. He loves the Olympics (he’s been to five!) and actively hates cauliflower.

Rohit Bhargava is an innovation and marketing expert, skilled facilitator, and keynote speaker. After graduating with an English major and studying screenwriting and poetry, Rohit moved to Australia in 1999 at the start of the dot com boom and started what would become a successful 15 year career as a brand and marketing strategist in the world of advertising.

During his time working at two of the largest agencies in the world (first Leo Burnett in Sydney and then Ogilvy in DC), Rohit built his career during a pivotal time in the world of marketing when digital tools were just emerging and a growing understanding of behavioral science was changing the way companies in all industries understood persuasion itself. In 2004, Rohit became an early adopter of social media and started writing a marketing blog that would soon become one of the top 25 blogs in the industry, according to Ad Age magazine.

Across nearly 20 years, publishing thousands of posts, he has continually introduced new groundbreaking ideas to the marketing world—from first inventing the concept of social media optimization (SMO) to publishing a manifesto for content curators that is widely used in digital marketing courses across the world. Once, he even sat in a meeting where a newly minted "senior digital strategist" explained the concept of SMO back to the room. As Rohit wrote the day after, "I should probably be honored. Having my own ideas quoted back to me a kind of flattery, right? At least now I know what being mansplained to feels like."

The growing popularity of his blog led Rohit to earn his first book offer in 2008, a traditional publishing deal with McGraw-Hill to publish his first book, Personality Not Included. The book was critically acclaimed, won a prestigious Gold Atticus award and was adopted by many tech leaders (one keen reader spotted the book in a Businessweek magazine article photo on the desk of former Yahoo CEO Marissa Mayer!) ... but never become a global bestseller.

After writing two other moderately successful books (one with another large traditional publisher and one self published), Rohit decided to leave his role at Ogilvy in 2014 and along with his wife Chhavi founded a new independent publishing company called Ideapress Publishing to publish his next book, Non-Obvious. The book was wildly successful, immediately hitting the Wall Street Journal bestseller list in early 2015 and propelling Rohit's keynote speaking career to the next level. Soon after, Rohit started the Non-Obvious Company as a consultancy and lifestyle brand dedicated to inspiring leaders to be more open minded and innovative.

The Non-Obvious Trends series that he first started as an online trend report and then turned into a book in 2015 became his signature online publication, with annual editions for the next five years, and culminating in the international bestseller Non-Obvious Megatrends, which hit #1 on the Wall Street Journal bestseller list and also the USA Today bestseller list. To date, the series has been read or shared by more than 1 million readers and won more than twenty international book awards including recognition by the Leonard L. Berry Marketing Book Award, the Eric Hoffer Business Book of the Year and a Gold Medal in the Axiom Awards.

As a keynote speaker, Rohit has been invited to share his insights at some of the most forward-looking organizations and stages in the world including Intel, NASA, Disney, JP Morgan Chase, LinkedIn, Microsoft, American Express, CES, SXSW, the World Bank, Coca-Cola and hundreds of others. At SXSW in particular, the long lines outside his popular Featured Session talks have wrapped around the entire Austin Convention Center and down the stairs to the lower level. After his packed session one year, an attendee tweeted after his talk that "he's no Beyonce, but definitely worth standing in line for." It's one of Rohit's favorite after-talk endorsements. He is indeed no Beyonce, but his sesisons are still pretty damn entertaining.

Outside of his time on stage, Rohit also spent several years teaching popular overbooked courses on storytelling, persuasive speaking and marketing at Georgetown University in Washington DC. In academia, he has also been invited to deliver guest lectures at many other prestigious schools including Stanford, Wharton and recently his alma mater - the Goizueta Business School at Emory University.

The most consistent connection for his fans, though, has continually been his popular email newsletter which he calls the Non-Obvious Insights newsletter and has been publishing regularly every Thursday for the past six years. In 2022, the Non-Obvious Insights Newsletter was honored by the Webby Awards (the Internet's highest honor) as the Best Email Newsletter, alongside submissions from the New York Times and CNN.

Thanks to his many years of sharing insights, Rohit has been recognized alongside visionary business leaders like Sir Richard Branson and Tom Peters as a “Top 100 Thought Leader In Trustworthy Business Behavior” and was named by global recruiting firm Korn Ferry as one of the “Most Influential South Asians In Media and Entertainment.”

On a personal level, Rohit is married and lives with his wife and two boys in the Washington DC area. He is a lifelong fan of anything having to do with the Olympics (he’s been to five so far, was sad to miss Tokyo, but is really looking forward to Paris 2024!) and actively hates cauliflower (yuck!). Outside of work, Rohit believes that the most entertaining and impactful job he will ever have is being a great dad and teaching his two boys to be kind when no one expects it, curious about the things others take for granted, and confident enough to change the world.

A Downloadable Script To Introduce Rohit

Rohit [ROW-HIT] Bhargava [BAR-GA-VA] is on a mission to inspire more “non-obvious” thinking in the world.

He is the #1 Wall Street Journal and USA Today best-selling author of eight books on marketing, storytelling, trends and diversity. His signature book, Non-Obvious, has been read or shared by over 1 million readers.

As a “non-boring” keynote speaker, Rohit has been invited to speak in 32 countries and is a frequent speaker and workshop facilitator for some of the world’s most pioneering organizations, including NASA, Disney, Microsoft, Coca-Cola, Marriott, World Bank, Intel, LinkedIn and over a hundred others.

Before becoming an entrepreneur, Rohit spent 15 years leading advising global brands on marketing strategy through leadership roles at Leo Burnett and Ogilvy. He is the founder of three successful companies, and teaches marketing and storytelling at Georgetown University in Washington DC. His thinking has also been featured on NPR, Fast Company and the Harvard Business Review and he writes a monthly column for GQ magazine in Brazil.

On a personal note, he loves the Olympics, hates cauliflower, is a proud dad of two boys and looks forward to meeting all of you in person later today. Please join me in welcoming ROW-HIT BAR-GA-VA!

Rohit [ROW-HIT] Bhargava [BAR-GA-VA] is on a mission to inspire more “non-obvious” thinking in the world.

He is the THREE-Time Wall Street Journal best-selling author of eight books on marketing, storytelling, trends and diversity that have been read or shared by over 1 million readers.

As a “non-boring” keynote speaker, Rohit has been invited to speak in 32 countries and in sold-out venues across the country. He is the founder of the Non-Obvious Company, and teaches storytelling at Georgetown University.

On a personal note, he loves the Olympics, hates cauliflower, is a proud dad of two boys.

Rohit in the News 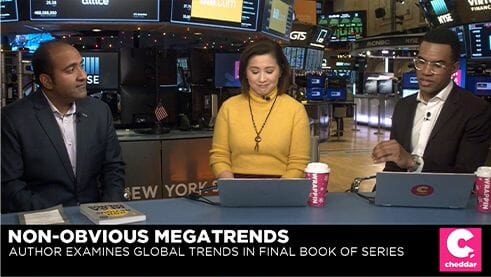 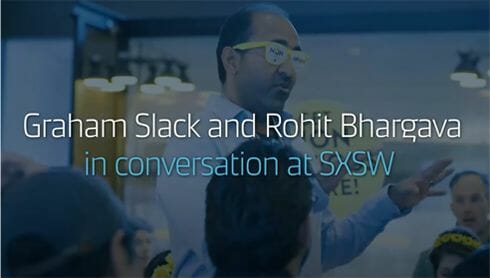 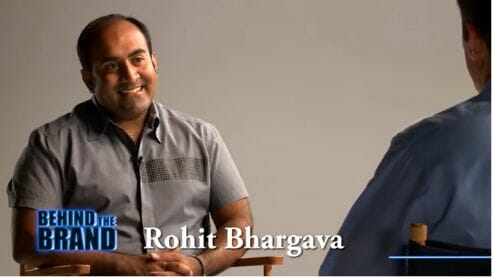 Behind the Brand Interview with Bryan Elliott