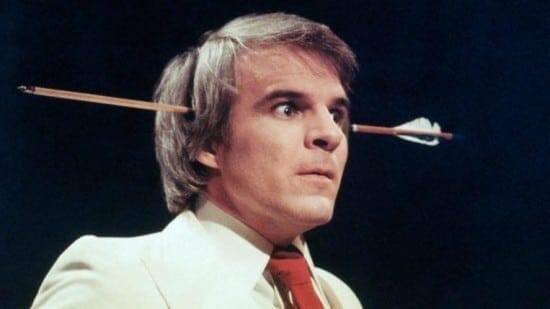 I have suffered through reading more social media books than you can imagine.

Thanks to ten years of blogging and writing several marketing books along the way, I’m clearly on the “official” list of potential book reviewers. Unfortunately after reading dozens of these hastily published books over the years, I find it hard to recall even a handful that I might recommend for someone to read to get better at using social media.  The sadly predictable fact about most of these social media guides is that the longer the page count, the more useless they generally are. 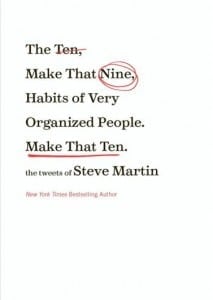 One of my favorite books to recommend instead is a book that hardly anyone would even consider a social media guide, written by a prolific actor, writer and banjo player who is just over a year away from turning 70 years old. It is only 103 pages long.

In fact, in 2010 when he first started using Twitter Martin notes that he approached it much the same way any celebrity might:

“I started tweeting purely for commercial reasons. I realized that when I did a television show to promote a book or record, and that television show had an audience of, say, four million people, about four hundred of them rushed out to buy the book or record. I figured if I had a Twitter audience of four hundred thousand–and audience that was tuned into me–and I promoted a book, then four hundred thousand of them would rush out and buy my book. Instead, forty of them rushed out to  buy my book.”

Two years later, he published a book based on his tweets called “The Ten, Make That Nine, Habits of Very Organized People. Make That Ten.: The Tweets of Steve Martin.”  The book, however, was inspired by a very interesting thing that Martin uncovered only after using Twitter for more than a year.  In the introduction to the book, he shares his discovery:

“When I started, around Labor Day of 2010, I didn’t really understand the ins and outs of Twitter, and it wasn’t until four months later that I noticed people were tweeting me back. Then, I started noticing how tuned-in and funny the responses were, and then a few months later I started saving the best of them (cut and pasted by hand, by me) in a file. This was real enjoyment: I would run to my wife quoting someone’s latest clever response, laughing hard.”

Rather than being a compilation of Martin’s funniest moments on Twitter – his book is a result of those tweets and responses that he collected over more than a year. Reading them is entertaining in the same way that reading a book filled with jokes might be … but the book has some deeper lessons for anyone considering building a social media following, using it to promote themselves or a business, or just trying to improve their content marketing and use of social media:

When you have as much old content as Steve Martin, it’s tempting to focus on just sharing all of that … but some of his most frequently shared tweets are interesting observations and comments on more current topics that anyone might relate to … such as the appearance of Twitter spam or the constancy of news headlines that you can’t seem to escape from.  He is, in essence, doing the same thing that Seinfeld managed to do for years in his “show about nothing.” When you can observe reality in an interesting way, people will follow and engage with you.

This might be my ego talking, but I feel my weight-loss spambot followers care about me. They really, really, do.

The world is not creating enough news. I need a new headline every hour. — Steve Martin (@SteveMartinToGo) March 26, 2014

As soon as you have people responding, it may seem like a challenge to find time to respond to all of them.  The solution is simple … don’t respond to everyone. Instead, pick and choose the people and tweets that you can respond to, but find a way of responding with a real human personality instead of corporate lingo.  The more human you can be with your responses publicly, the more likely people are to see a value in engaging with you and your brand through social media on Twitter or any other social media platform.

I’m standing right next to you. RT @ErikJones1502: you gonna be in Tennessee anytime soon? — Steve Martin (@SteveMartinToGo) June 17, 2014

3. Self promote with authenticity.

Of course, one of the benefits you likely want to realize from your efforts with social media is to have the opportunity to promote yourself or your business. This can be a tricky thing, as you don’t want to focus only on yourself and risk alienating those who are following you.  If you look at Martin’s tweets, he isn’t afraid to promote his own efforts or what his working on.  Yet every time he does it, he is authentic and shares a bit of his trademark humor along with the promotion to soften the blow.

I’m excited to play in Hartford, CT on Thursday! When I think of bluegrass and comedy, I think of Hartford, and some initials!

It would be so great if I were to win an Oscar tonight. — Steve Martin (@SteveMartinToGo) March 2, 2014

Everyone makes mistakes and it can be one of the most challenging things to deal with in the public and real time forum of social media.  When writing his book, Martin shares a story of how he once accidentally tweeted his own name while attempting to search for mentions of himself.  Instead of being embarrassed, he immediately tweeted “Steve Martin oily muscles beach Speedo photo.” Then a few minutes later he tweeted again: “Sorry, meant to Google myself.”  This trademark honesty and humor is something he has used over and over to admit and correct his own mistakes … a technique well worth considering for your own use.

Because it’s wrong and has been corrected. RT @CAGoldenBear: Why does your profile say “(not on tour currently?)” Shhhh! — Steve Martin (@SteveMartinToGo) March 10, 2014

5. Create your own schedule.

When you start using social media – most experts will tell you that you need to create a schedule and stick to it.  Sometimes life or work gets in the way.  For Martin, that’s just another situation to share honestly that he may be taking a break from Twitter to focus on other things.  You may lose some followers who need the constancy of your content in order to engage, but most will likely stick around and come back when you do become active again … as long as your content when you return is worthy of their time and attention.

Taking a hiatus from Twitter for a while to concentrate on @ediebrickell ‘s and my musical “Bright Star,” opening in San Diego in Sept.

There are plenty of books on social media – and some are truly useful if you happen to be sitting in front of your computer and need a step by step guide to executing some tactic. But if you’re looking for an unexpected guide to help you change the way that you approach social media strategically, I highly recommend picking up Steve Martin’s “The Ten, Make That Nine, Habits of Very Organized People. Make That Ten.: The Tweets of Steve Martin.”