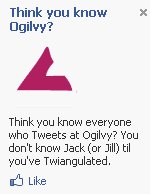 Let me go on the record to say that if you happen to be a vendor of some type of social networking solution or software that would be useful for an agency like Ogilvy, hands down one of your most effective methods of advertising has to be to target the Ogilvy network on Facebook with a customized ad. I have seen several ads like this for solutions and find myself always clicking on them – not because they say Ogilvy but because I presume that someone has done their homework and identified that whatever they are promoting is particularly relevant for someone who works at an agency like ours. So I'll give the the benefit of the doubt and click further. That's how I found Twiangulate.

Though I could just as easily have gotten an email from Henry about it, the fact that the ads were properly targeted already tells you something about the thinking about creating and promoting the site. Recently a few influential folks whose opinions I respect, like Sree Sreenivasan also profiled the site and talked about their own experience of finding it highly useful. So that initial ad coupled with the validation that comes from seeing someone in my network using it was enough to get me to try the site … and now I'm hooked. I've tried lots of similar Twitter-Finding-Following-Ranking type applications. They always seem to spit out a number or list at the end with relatively little context and everything is ranked by volume. More Twitter followers equals a higher influence in general. 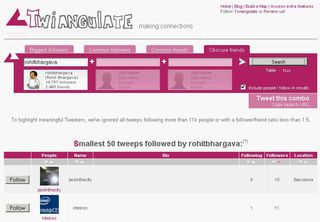 Twiangulate (a brilliantly named site) is from the folks behind BlogAds, and features similar smarts to help make simple sense of a big problem … who you should actually care about reading on Twitter. It's not a sexy site, just as BlogAds isn't – but there are at least three reasons why you'll love Twiangulate:

Chances are I'll uncover a few more interesting ways that the site could be used to help find the most interesting and influential people to pay attention to on Twitter. In the meantime, good luck doing your own twiangulating!

5 thoughts on “Twiangulate Lets You Follow Your Followers' Followers”