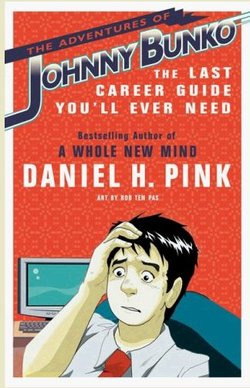 One of the best discussions I managed to make it to at SXSW was also one of the smallest … a talk by Daniel H. Pink (author of A Whole New Mind) all about the rise of Manga.  It is a topic I am particularly interested in because there is an entire passage in PNI all about it, but Dan’s cover article for Wired magazine was one of the pieces of reporting that really put the Manga phenomenon into terms that Americans could understand.  For those unfamiliar with Manga, it is essentially a form of graphic novel that is hugely popular in Japan and growing in popularity across the rest of the world.  He shared some interesting stats about Manga, in particular that 22% of all reading material in Japan is produced in Manga format.

In the US, the adoption of Manga as a form of literature, fiction and fantasy has been steadly on the rise … yet, the interesting thing Dan focused on in his session was just how pervasive the form may become as a method of relaying business ideas.  His new book, called The Adventures of Johnny Bunko:The Last Career Guide You’ll Ever Need is a career advice manual for just about anyone who wants to find a better direction for their career.  In a brilliant move for pre-promotion of the book (which officially comes out in April), he gave a free copy to all the attendees of his early talk (10am the Sunday morning after Daylight Savings Time).

As an author, one of the biggest things that I took away from his talk was that the anatomy of a great business book is changing.  There are two types of business books, tactical and strategic.  Tactical books are a waste of time, because people are seeking that information online.  If you want to learn how to do just about anything, there is bound to be a more recent resource online for it.  So the idea of producing these tactical kinds of books on how to do something aren’t worth it.  The thing to focus on, instead, is a book that presents a strategic theory and proves to someone why they should care.  Those are the kinds of books people buy and share.  I totally agree with him, though my book does fit into both categories because of the two part approach.  The anatomy of a great business book means first and foremost to be strategic.  Amen to that … and definitely go and buy The Adventures of Johnny Bunko today (buy it from The Ultimate Marketing Bookstore and all proceeds will go to Donor’s Choose).  No matter where you are in your career, you’ll get something out of it.