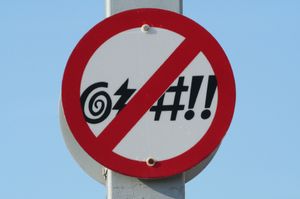 I am not usually a fan of curse words. As a Dad with two young boys, I've especially become very conscious of them as I try desperately to help my oldest make it to his seventh birthday without trying it out in conversation. We're just a few weeks away.

Still, for some time I've been thinking that it may have an underestimated value when it comes to marketing. The first time I thought about this was when reading about a wonderful social marketing campaign from Saatchi and Saatchi that was done close to 20 years ago. It was for an organization fighting childhood hunger on the streets in Canada (I think) and as the ad featured visuals of young homeless boys on the street just trying to survive, the following voice-over of a boy's voice came on:

Those three simple lines stuck with me. At once they were a sad reminder of how desensitized we can get from the real issues in our world, and how we tend to focus our attention on the wrong things. The ad came back to me last week as I watched the online firestorm and conversation erupt from a single tweet sent by prolific blogger (and frequent agitator) Jeff Jarvis.

The tweet, in response to watching some of the posturing and deadlock in the recent "conversation" from politicians in Washington around the debt ceiling was short and emotional:

"Hey, Washington assholes, it's our country, our economy, our money. Stop fucking with it." (@jeffjarvis)

At the suggestion of one responder on Twitter, he then shortened the sentiment to a hashtag (#fuckyouwashington) which took off (read a great curated version of the full story on Storify). Over the next few days, the sentiment led to hundreds of thousands of retweets, interviews with mainstream media, and some backlash and indignation from DC-residents who took issue with the tweets directed at their entire city instead of just the politicians.

In a followup blog post aptly titled "No one owns a hashtag" – Jarvis shared why profanity was such a necessity though it may have offended some:

"Some wanted me to clean up the hashtag because it offended them. But as I tweeted in response, #dagnabbitwashington would not have had the same impact. It was the profanity about profane politics that made it take off, I believe."

His conclusion was the same one that led one of the world's largest advertising agencies to use the same profanity as a wake up call to resensitize an audience to the importance of a serious issue like childhood hunger. The big conclusion from both examples is a truth that perhaps we too often forget … sometimes there is simply no substitute for a well placed f-bomb.