Last night Hulu continued their partnership with Facebook to allow people to watch the premiere of highly anticipated Fall TV shows such as Heroes and The Office with their Facebook friends through a "social TV" app. With this latest effort, they are trying to popularize a concept that has been talked about among the techno-elite for some time … the idea that people could watch programming in a live stream online with friends and have a real time conversation about it as it was happening. In preparation for this blog post, I was all set to register for the event on Facebook and login at 8pm to watch the premiere of The Simpsons with any of my Facebook contacts who happen to be also watching it live. 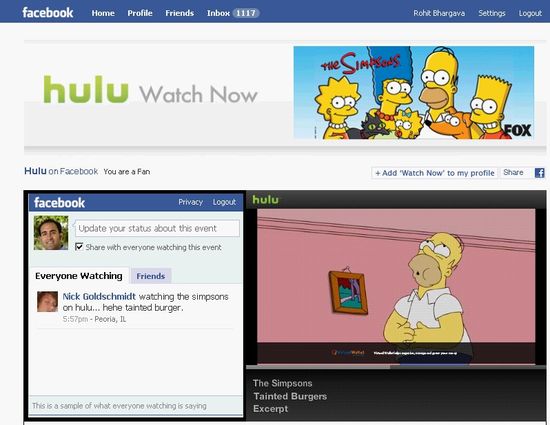 Unfortunately, that plan failed. My personal failure, however, offers a glimpse for marketers into what the true potential of social TV might be – and why there is so much skepticism and debate about whether it constitutes a real revolution in the world of entertainment, or is just another solution for a nonexistent problem by an industry increasingly desperate to find new revenue models.

The objections to the idea of social TV usually fall into three categories:

In part, a combination of these factors led to my own failure to have a social TV experience around The Simpsons premiere last night too. I was putting the kids to bed at 8pm, and when I did watch the show on the DVR later last night – I had no desire to comment online about it or watch it with anyone but my wife at home.

You could easily conclude from my description above that I'm not a believer in the promise of Social TV. Actually, that's far from the truth. Despite these shortcomings, I think there are some very real and very interesting ways that this concept of Social TV could be applied to marketing, as well as used as a real time feedback channel to improve/optimize programming. Here are a few:

For most brand marketers, it is this last category that may present the most interesting opportunity around social TV. After all, if you can get people to engage in a real time discussion around the programming as they are experiencing it – extending that to the advertising alongside that programming shouldn't be too far behind.

18 thoughts on “Can Hulu Crack The Code On Social TV?”