One of the hottest videos on YouTube this past year is the Battle at Kruger video featuring the amazingly watchable battle of lions, crocodiles and buffaloes on a Safari.  The video is nearing 8 million views in just a few months, and is an obvious prediction to take over the crown from the Free Hugs campaign for video of the year in 2007.  Chad Hurley, founder of YouTube, even pointed it out as his favourite video at the recent Webby Awards.  Here it is in case you haven’t seen it: 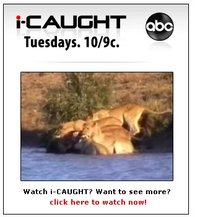 A good friend of mine from college, Jason Schlosberg, was one of the pair behind the Internet phenomenon which was just featured as the lead video on NBC News’ new program, i-Caught (which premiered last night).  The show is just one amongst several others that features popular online viral videos, but takes the slightly different approach of featuring the stories behind the videos and how they were made and why there were uploaded.

Watching the show, and seeing my friend and his story, the most interesting part was when they interviewed a pair of videographers who had been shooting video and documentary footage for 25 years.  The pair listed off all the hardships they had gone through, from suffering malaria to dealing with near desert climates.  And they had never witnessed a moment like the Battle at Kruger.  This is the next evolution of the funniest home videos.  It’s no longer enough to capture moments of extreme stupidity (staged or real) on grainy footage.  The new age of amateur content creators are capturing once in a lifetime moments that even the professionals watch with envy.  Welcome to the new world of media.

2 thoughts on “Behind the Scenes At The Battle of Kruger”