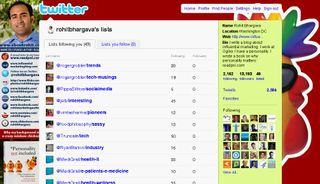 There is no denying that Twitter has had a huge impact on how marketers are thinking about using social media tools for marketing. One thing that is most interesting about it, however, is how the site has managed to avoid overcomplicating itself with more features. Twitter is simple, and it just works. Of course the one overused word that has been used recently to describe Twitter is that it is a "firehose" of information, shooting out at a speed and volume that has threatened to make it unusable for many people. So when I had a chance to try out Twitter's new Lists feature (which I had been looking forward to seeing for some time), I was not only surprised, but also excited about what this will mean for all of us who use the site. Here are just a few reasons why I think lists may revolutionize how you use Twitter.

Clearly, I'm excited about what Twitter Lists has to offer for marketers. What do you think – is this a big deal for marketers or for anyone else?