Last week on December 1st to support World AIDS Day, a small group of celebrities with millions of fans led by Alicia Keyes decided to sacrifice their digital lives to try and save real ones. The campaign, cleverly called "Digital Death" was supported by posters, online ads and a well branded microsite. The premise was simple: a group of celebrities forego using Twitter or Facebook until $1,000,000 in donations are raised for their cause. Anyone involved with the idea might have guessed that this would last for a day or two before the target was met. It has been five days and the donations still haven't even hit $300,000. 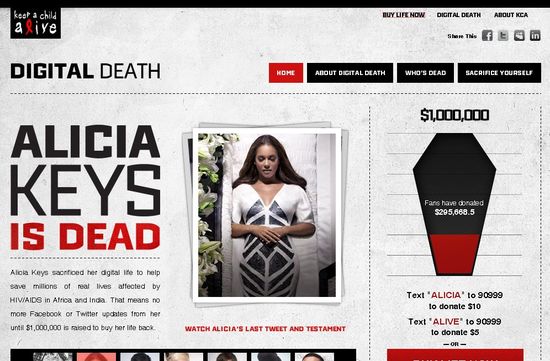 This idea isn't bad. The celebrity support is top notch. And the branding is really strong. So why did a campaign like this which has all the individual pieces it should need for success fall flat? Here are a few reasons:

How could this campaign have worked and still made a big impact? One core thing I would have changed is to use the power of all these celebrities Twitter accounts for something more than silence. What if they all chose to spend 24 or 48 hours ONLY tweeting about Keep A Child Alive? Or how about donating some of their own money for everyone who asks them to stop their digital death?

This campaign had a chance to be something great – but now the only thing left for us to see is how the celebrities participating will come "back to life" online and quietly leave this behind them.

Update #2 12/6/10 9:02pm – Looks like the campaign miraculously went viral and raised over $700k in less than 24 hours so they are now at over $1 million raised. Either that or some of the celebs put up some cash to get their own digital lives back.