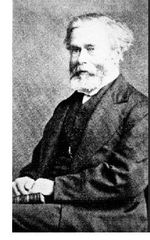 NOTE: This is an excerpt from Chapter 8 of my new book Likeonomics all about Timing, the 2nd principle of Likeonomics. I hope you enjoy it!

In 1855, a Scottish clergyman named James Gall had an idea that should have changed every map ever created, but didn’t. It was four years before Charles Darwin would publish his Origin of Species, and Gall was presenting his world-changing idea at a Glasgow meeting of the British Association for the Advancement of Science. The world he lived in had long since evolved from the point where people thought Earth was flat.

The most commonly used map of the time was known as the Mercator map and was originally developed to help sailors to navigate the ocean and reach their destinations. It had been used for hundreds of years. There was only one problem . . . it was wrong.  In taking a spherical globe and projecting it onto a flat piece of paper, the sizes of the landmasses were distorted. Greenland, for example, looked huge while Africa appeared much smaller. In reality, Africa’s landmass was nearly 13 times the size of Greenland: 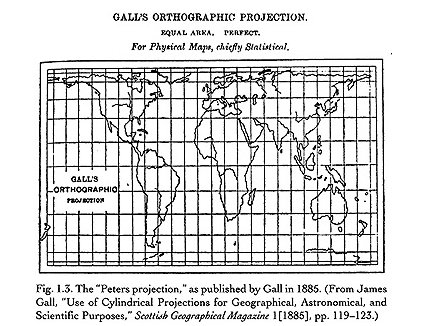 Gall’s theory corrected this “projection problem” and adjusted the size of the landmasses-but it was too radical for his time. He and his map were widely ignored, and would be forgotten over the next thirty years. Then, in 1885, the first inaugural issue of The Scottish Geographical Magazine was set to be published. Resolved to give it one more try, Gall named his theory the “Gall Orthographic Projection” and wrote an article about it for the magazine (see Figure 8.1). When published, it unfortunately met with the same fate as before and was quickly dismissed.

What did a reverend from Scotland know of cartography anyway? Time and history would forget Gall and his map projection again-this time for nearly 100 years, until something interesting happened in 1974. 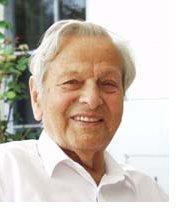 That year, a German historian named Arno Peters proposed an almost identical idea that he had developed independently without knowing of Gall’s work. His projected map, though, appeared to be nearly the same as Gall’s, and was based on similar calculations of longitude and latitude. Peters’ map (which he called the “Peters projection map”) was introduced at a much different time in history.

In 1974, the world was consumed by the promise of racial and political equality. People had lived through two world wars, numerous revolutions, and race and gender rights were hot topics. The Peters projection map was seen to offer a symbol of hope and redemption for cultures around the world that had been colonized by Western nations

It became a symbol of the skewed worldview that many Western countries still held toward the rest of the developing world. It even found some advocates in the Western world itself. Over the next decade and a half, controversy and intense debate followed the map everywhere. The former Chancellor of West Germany

Willy Brandt used the map as a symbol of the equality of nations. The map was circulated among regional offices of the United Nations and other global organizations to be displayed on the wall. Gall’s original map idea, meanwhile, had resurfaced thanks to his published article, and cartographers started referring to the new combined map as the “Gall-Peters Projection map”-the name it is known by today.

Despite the controversy and political pressure keeping it from widespread adoption, the map has never really died. Over the three decades since it was introduced, the map has been featured in the American serial drama The West Wing and often used by military strategist Thomas Barnett on C-SPAN. In 1990 it even led a group of the most respected geographic organizations in the world to issue a recommendation to “strongly urge book and map publishers, the media and government agencies to cease using rectangular world maps for general purposes or artistic displays.”

Today, while the Peters projection map is not considered the standard, it has been credited by academic and creator of The History of Cartography Project J. Brian Hartley with sparking the global debate around the political implications of maps and cartography. Gall, meanwhile, is only remembered ceremoniously in the merged name of the map. Why did two men with almost identical ideas have such differing levels of success when introducing their respective ideas to the world?

The reason Peters was able to succeed at getting worldwide recognition and inspire an international debate while Gall was largely forgotten is all about the importance of timing, and it explains a lot more than just the history of cartography.

The Most Creative Lunch in History

In the fall of 1994, Microsoft was moments away from buying Pixar. Yes, you read that right. It was a year before the first Toy Story movie was released, and Pixar was bleeding money. Toy Story was running $6 million over budget and Steve Jobs had already put nearly $50 million of his own money into Pixar. It seemed like a lost cause. Desperate to salvage any part of his investment, Jobs had told his team to speak with any interested buyers.

Nathan Myhrvold was interested. As Microsoft’s technology evangelist, his job was to seek out new and promising technology. Pixar had something that easily fit the bill. In order to create the complex graphics required for their upcoming film, they had built an extremely advanced 3D graphic design software called PhotoRealistic RenderMan, or PRMan for short. PRMan was the perfect software to help Windows programs power higher end graphics, andMyhrvold was ready to sign a deal. As the Pixar team prepared for the meeting, they pulled together one of the first completed scenes from the yet-to-be-completed Toy Story film to share with Myhrvold as well. The scene was the march of the green army men and their rope drop from the second floor. The plan was to use this sneak peek as a chance to try and get Myhrvold interested in buying the studio arm of Pixar as well as the PRMan software. Unfortunately, he didn’t bite.

Filmmaking wasn’t really Microsoft’s core business. He just wanted PRMan. It was Jobs, however, who would pull back from the negotiations abruptly and decide not to sell anything. As Pixar employee Pam Kerwin would later recall, “Steve kind o
f jerked back because, I think,there was something visceral in him that said, ‘This is going to be really stupendous.”’1

It turned out his instincts were right and Pixar would go on to become the most successful animated film company in history. What Jobs didn’t know was just a few months earlier, to plan for the future, the Pixar animation team had what may have been the most creative lunch in history.

Their animators were putting the finishing touches on Toy Story, and a small group including director John Lassiter and other creative team members were gathering to talk about what should come next. During that lunch, they came up with a list of new movie concepts that  would eventually inspire three more blockbuster Pixar films: A Bug’s Life, Monsters Inc., and WALL-E. Together, these films would gross $2.2 billion at the box office and be nominated for 15 Academy Awards. The story of the near death and meteoric rise of Pixar is a favorite of mine for several reasons. It includes everything from the triumph of creativity to the birth of an entire industry of computer-generated animation that would lead to some of the most entertaining films of the past two decades.

More than anything else, though, these stories always of the power of having the right timing. The inspiration for 10 years of filmmaking happened over a lunch meeting. The fleeting moment when a critical piece of Pixar was almost sold to Microsoft was also all about the pivotal timingof deciding to stay the course or sell the company.

Everything from finding the love of your life to launching the next world-changing startup comes down to having the right timing. Timing really is everything.

This excerpt is from Chapter 8 of Likeonomics, all about Timing – the fifth of the TRUST principle that I lay out in the book.  For a longer excerpt, please visit the book website at www.likeonomics.com/excerpt – and if you enjoyed the reading this, please consider buying Likeonomics today!

2 thoughts on “Timing – The Most Creative Lunch In History”