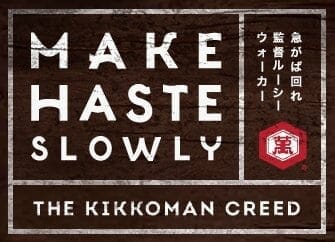 “Started by a woman, in a time when women didn’t start companies.”

These are the powerful first words that introduce the story behind a brand you probably forgot you have in your kitchen right now. Kikkoman is the #1 best selling soy sauce brand worldwide, in a category filled with syrupy competitors that can rarely lay claim to any sort of cultural heritage – much less one than is more than 300 years old.

In an effort to tell that story, a year ago Kikkoman commissioned Academy Award™ Nominated filmmaker Lucy Walker to produce a short documentary film about the heritage and family creed that has inspired Kikkoman since its beginning. The documentary tells the powerful story of Shige Maki, wife of a slain samurai warrior who escaped Osaka to the city of Edo (today’s Tokyo) in the early 1600s.

Settling in the village of Noda with her son, they learned the craft of brewing shoyu – or soy sauce. As author Ronald E. Yates wrote in The Kikkoman Chronicles: A Global Company with a Japanese Soul, “behind every bottle of Kikkoman, there’s a Kikko-woman. The remarkable, resourceful, Shige Maki.”

Today the heritage of the company is told through these powerful videos and the modern day translation of their longtime family creed: Make Haste Slowly. In a world that doesn’t seem to do anything slowly anymore, Kikkoman’s approach stands out. Even their marketing strategy is slow and steady. The videos were produced more than a year ago, and still have barely a quarter million views – a low number considering the ubiquity of the brand.

Yet that understated approach may be part of the appeal. Like many others, I discovered the videos through serendipity and now am writing about them thanks to the power of their storytelling. This is the opposite of a Super Bowl ad. We live in a media landscape where big budgets don’t necessarily lead to capturing mass attention, thanks to “advertising blindness.”  Fighting back, many marketers have turned to content marketing as a potential solution to capture the attention of overloaded consumers (a topic I have written about the challenges of before).

The theory behind content marketing is simple: provide solutions or utility through content, and the customers will pay attention because you are providing something valuable instead of promotional. Yet the other thing we know about consumer behaviour is that emotional responses to stories can drive powerful behaviours and beliefs. Solving a problem sometimes isn’t as memorable as sharing a powerful story.

And that ultimately may be the most important lesson that Kikkoman’s story and video can teach us. In a world filled with brands desperate to solve problems and brands dedicated to using shock and awe to capture eyeballs … perhaps the only way to really stand out is to quietly tell a great story.