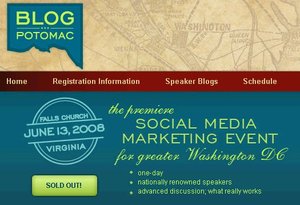 Last night I had an interesting challenge: to speak at the Speaker’s Dinner before BlogPotomac (a gathering discussing social media right here in the DC area today). The majority of people in the room had top blogs, spoke at events frequently, and several had authored their own books. Added to that was the fact that the venue was during dinner in a busy and noisy restaurant and clearly not a time to break out the powerpoint. Clearly, this wasn’t a group that needed to hear about the power of blogging or what personality can do for your business. These were the leaders who already know that. In many ways, this is the toughest kind of audience to present to.

There were four facts about this dinner that shaped what I ended up presenting:

My "presentation" was based on these facts, which I knew when I walked into the restaurant. What I ended up doing was giving everyone a piece of paper and asking them to come up with an idea for what to do with their second copies of PNI. Each idea would be folded and put into a wine glass, and then everyone would pick one out (hopefully not their own) and read it out loud to the group along with introducing themselves. The idea was to do something unique and encourage word of mouth about the book, while making fun of the fact that many people now had two copies and also giving everyone a chance to meet everyone else in a sort of table-wide ice breaker.

Over the next week or two, I’m hoping the attendees do follow through on their suggested options for the second book, which ranged from leaving it on the Metro (or Subway) to giving it to their Boss. The most unique suggestion of the evening was to donate a copy to Hillary Clinton’s campaign so she could find her missing personality. Hey, it wouldn’t be DC unless there was at least one political suggestion, right? At the end of the 15 minute session, I asked anyone who needed a second copy to email me and I would send them one. What I learned from the experience was that being flexible, knowing your audience, and doing something fun and useful makes a much better presentation sometimes than sticking to the powerpoint. Consider that next time you’re in a non-traditional speaking situation.