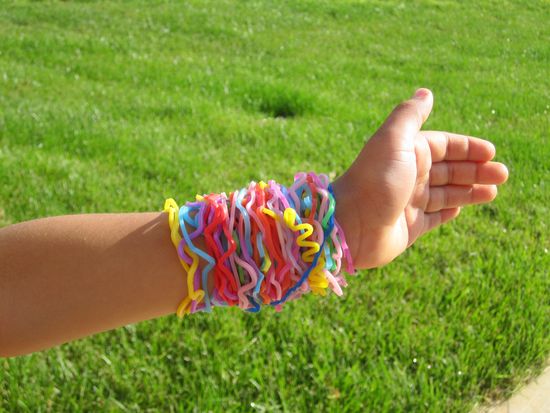 UPDATE 06/15/10 – Listen to my radio interview on NPR's All Things Considered about the Silly Bandz fad.

They are for boys or girls, you wear them on your wrist or elsewhere and just about every kid has to have an arm full of them, prompting many schools to ban them. Welcome to the world of Silly Bandz. Like most toy sensations to hit the market, there are no shortage of gushing morning shows, and idolatry newspaper articles declaring the little silicone/rubber bands in various shapes the must have kids toy of the moment. Stores sell out in hours and brands are getting in on the action by creating licensed versions of these bands. Though this probably fits the textbook definition of what any marketer would call a fad – it does stand apart from many other toy fads for a few key reasons that might just make this one of the most interesting product marketing examples to come along in several years. Before you dismiss this as just another blog post jumping on the bandwagon (um, pun intended), here are a few reasons I think this fad may be worth a deeper look:

What do all of these points add up to? These bands may last no longer than most other product fads, but the lessons from their rise to popularity are ones that we can all learn something from.

7 thoughts on “Silly Bandz: Could The Perfect Toy Save America?”