In the health communications world, there are some messages that you could call prevailing. Whether or not they are true, they are the ones that seem to stick in people's minds. Messages like getting 5 servings of fruit and vegetables a day, or trying to keep your daily calories under 2000, or getting 8 hours of sleep. The last one about sleep may be the most stable. In the last several decades, this message hasn't changed much. So when a mattress manufacturer decides to launch an entire campaign that finally makes it ok (though probably still not ideal) to get less than 8 hours of sleep, that's a big departure. 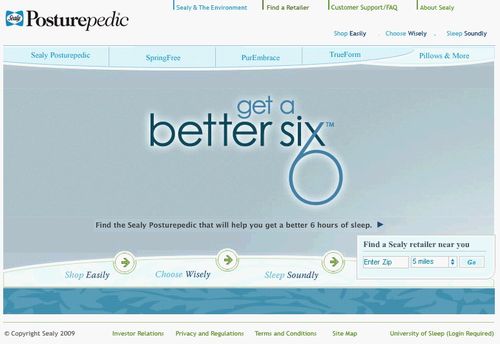 Sealy's latest campaign is all about taking a more real approach to how much sleep most people actually get. Based, presumably, on some believable research that demonstrates most Americans today just get 6 hours of sleep – the campaign is called "Get A Better Six" and focuses on how you can maximize your comfort for those 6 hours you actually do get. It's a brilliant departure from standard mattress and sleep related marketing that will likely drive their competitors crazy, because it's such as obvious message and one that anyone in the industry could have used.

To bring it to life, they choose to use some equally realistic language, instead of the usual marketing doubletalk that you can often find behind campaigns like this:

Remember the days of getting eight hours of sleep? Neither do we. Most of us these days are getting a scant six hours of sleep. The equalizer? The all-new Sealy Posturepedic.Â® Designed to eliminate the pressure points that cause tossing and turning.

How did we achieve such a miraculous feat? Well, the short version (there’s a more technical version below) is that it used to be, we either had push-back support or pressure relief. Never both. So, with some very smart guys called the Orthopedic Advisory Board, we made the push-back support/pressure relief dilemma history. And voilÃ , the new Sealy Posturepedic was born. Mattresses that make the six hours of sleep we do get, a better six.

The end result is that not only do we as consumers feel that a mattress company is finally adapting to the realities of our life and how much sleep we actually get … but the voice with which the story is told lives up to that promise of "keeping it real." In a world where six hours of sleep is the new normal, it's about time someone in an industry focused on sleep was bold enough to admit it and tell us that's ok.

8 thoughts on “Sealy Admits Reality: No One Gets 8 Hours Of Sleep”