Earlier this month, the IFC channel launched a new three part mini-series called Bollywood Hero that featured the story of an American actor (Chris Kattan) who decides to leave Hollywood for Bollywood to become a leading man. The show aired in early August and has been replaying on the channel since then. I found it entertaining and highly recommend it, but I doubt you're reading this blog to get my review of a TV mini-series … so let's talk about the marketing.

The first thing any marketer would notice is that the show seemed to have two main sponsors – Palm (focused on promoting their new Pre) and esurance.com: 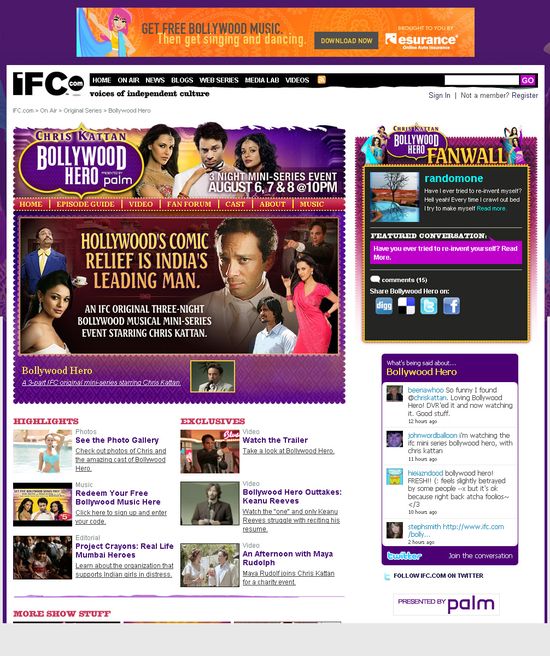 What was most interesting about these sponsors, however, was not that they both chose to support the program (which I think is great), but in how they chose to "activate" their sponsorships. Palm placed banner ads and logos on the website for the film that pointed to a branded page all about the Palm Pre. No mention of Bollywood, the campaign or anything related to the film. Esurance.com, on the other hand, chose to put together a full campaign called "Bollywood Casting Call" that invited lovers of Bollywood dance to submit their videos for a chance to win the "prize" of being animated to dance in an animated promo for the brand with their cartoon spokesperson Erin Esurance: 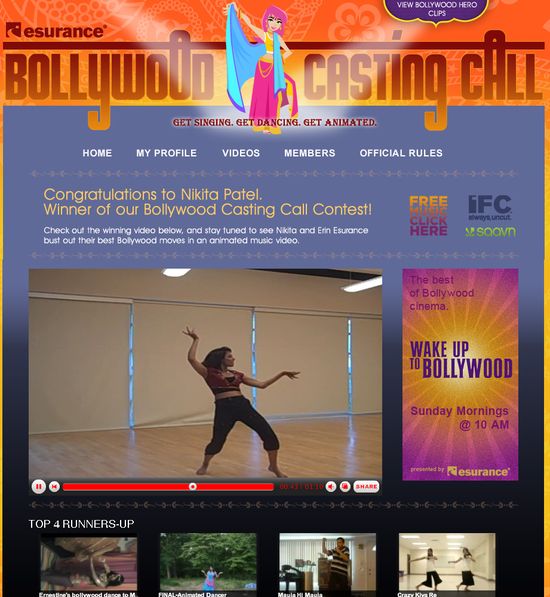 Anyone who has seen a Bollywood film (or even a farce about one) knows that a good part of the film is about the dancing. Picking up on that, esurance.com invited people to participant in the fun and offered an outlet to become a part of their campaign. Though the tie to the film could have been stronger, the campaign generated 54 video entries and over 25,000 video views – over what seems to be a relatively short duration of a few weeks. More importantly, esurance.com now has several branded videos online to use as marketing assets, and will soon have one more when they create the animated prize video featuring the winning video.

Palm on the other hand may realize some brand awareness and positive brand association for choosing to sponsor an independent production such as this, but leaves much of their opportunity on the table by not choosing to integrate the campaign more into their overall efforts. What could they have done? Exclusive content on the Pre to drive trial and maybe even purchase, giving product to the winners of the dance contest, or even creating a demo of the product where you could watch a trailer of the film on the Pre would all have been ways to further engage the audience with their product and get more out of their sponsorship.

One final yet simple idea: imagine if Palm just did more to support of one of the best marketing tactics for the film itself … a flash mob dance in Times Square (video below) that has already generated almost 200,000 views. Sometimes it's not enough to put up the money to simply sponsor or underwrite something – to really get the value from it you need to take a more integrated approach.