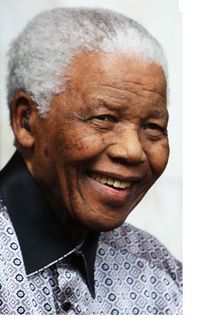 July 18th isn't really a holiday all over the world, but perhaps it should be. It is the birthday of Nelson Mandela, and our team out of London is supporting an initiative to help this iconic South African leader get the recognition he deserves. So today, you can join people like Desmond Tutu, Eddie Izzard, and Jamie Oliver to make your own pledge for global good in the official pledge book.

Our team is also encouraging poeple worldwide to devote time (specifically 67 minutes in recognition of his 67 years of service) community service to pay tribute to the anti-aparthied icon. To help support the intiative (beyond taking the pledge), I thought I'd share an excerpt of Nelson Mandela from the Introduction of Likeonomics. When I first started to write a book about the power of likeability to inspire others, he was near the top of my list of people to write about. Once you read the story and see some of the wonderful work to support his recognition, I think you'll agree. He wasn't just a likeable and inspirational figure … he truly changed the world around him.

The first time I experienced the powerful influence of Nelson Mandela was from the front seat of a taxi cab riding down the streets of Jo’burg (as the locals call Johannesburg). Mandela’s picture was on billboards along the highway to the city even though he was no longer president of South Africa, and my driver was speaking about his influence and how he had inspired the nation. That story started nearly 20 years ago.

In 1993, tens of thousands of Afrikaners (white South Africans) were preparing for war. Three years earlier, a man named Nelson Mandela had been released after 27 years in prison. He was no hero to this group. They saw him as the founder of a terrorist organization who threatened their way of life and belonged in jail. They were ready to fight.

As reporter and biographer John Carlin wrote, that was the moment where Mandela began ‘‘the most unlikely exercise in political seduction ever undertaken.’’1 He invited the Afrikaners leaders over for tea and listened to their concerns. Then, he persuaded them to abandon their guns and violence. The battle never happened.

A year later, he was sworn in as president of South Africa and vowed to make reconciling the racial tension between whites and blacks his number-one priority. Somehow he had to overcome decades of hate and convince people ready to die for their causes to see one another as brothers. In one of his first acts as president,Mandela invited Francois Pienaar, the captain of the South Africa national rugby team (Springboks), to have tea with him. That afternoon he struck an alliance, asking Pienaar to help him turn rugby into a force for uniting all South Africans.

During the Rugby World Cup in 1995, Pienaars led the mostly white players of the Springbok team in singing an old song of black resistance, which was now the new national anthem, ‘‘Nkosi Sikelele Afrika’’ (‘‘God Bless Africa’’). It was a powerful demonstration that the players believed in having a united South Africa. Inspired, the team fought the odds and made it to the finals against New Zealand.

On June 24, 1995, minutes before the final match would start, Mandela went on the field in the middle of the stadium wearing his Springbok green shirt to wish Pienaar and the team good luck. The crowd, made up of mostly white South Africans, was stunned. For many years, that green shirt had been seen as a symbol of only white South Africa. For a black man to wear it was unheard of.

The crowd erupted in cheers of ‘‘Nel-son, Nel-son’’ and everyone across South Africa celebrated. Mandela would go on to lead the racial reconciliation both during his presidency, and then after as an ambassador to the world for South Africa. In 2004, the country was awarded the world’s largest stage to host the 2010 FIFA World Cup. It is now seen as a likely future Olympic destination, as well.

This story of South Africa’s triumph was chronicled by Carlin in his book Playing the Enemy: Nelson Mandela and the Game That Made a Nation. It was so powerful, it inspired the Academy Award–winning film Invictus by director Clint Eastwood.

Why People Believe in Likeability (and Why They Don’t)

The fate of South Africa is linked to the story of one man’s personal charm and likeability. This may seem like an extreme example. After all, not many people have the gift that Mandela has. Yet, his experience does explain the very fundamental role that likeability can take in inspiring belief and changing our world around us. People didn’t follow Mandela because of the ideas; they followed because of him. When he invited you over for tea and listened to your concerns, and then spoke, you couldn’t help trusting his vision.

5 thoughts on “How Nelson Mandela Used Likeability To Succeed”