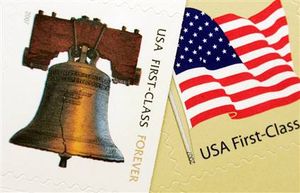 The US Postal service has a special kind of stamp. After raising the postage rates a few times in the relatively short timeframe of a few years, the USPS was getting criticized by people across the country for making their current stamps they had at home obsolete. If you bought your stamps at a time when they were the correct postage, critics argued, shouldn't they work no matter when you use them?

The USPS agreed and released the "forever stamp." The idea was simple – you could buy this stamp with the Liberty Bell on it at the current postage rate, and no matter what the rate would be in the future for mailing a 1 ounce letter, the stamp would be valid.

This idea of forever is a powerful one. What if your customers thought you wanted to keep them as a customer forever? Many cell phone contracts offer you a rebate only after you have been a customer for six months. Cable companies offer one year promotional rates. Credit cards waive the fee for the first year. Sometimes it seems that just about every promotional offer you are likely to get is only good for a limited time. Then you're a regular customer and you stop mattering. Or at least, you matter less.

Do these companies really want to keep you forever? It doesn't seem like it. I've been a blogger on the Typepad platform for over 5 years now. When I first signed up, I got a lifetime discount of 10%. So every year, I save that. How much does that amount to? Probably less than 10 bucks a year. But how much does it make a difference in my perception to know that SixApart cares about having me as a customer for as long as I'll stay? A lot. Forever is a word people aren't used to hearing from marketers. But forever is good. If you could keep every customer you get forever, you'll be in business for just as long.