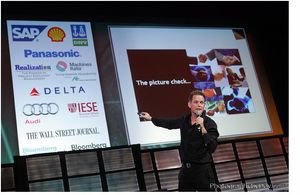 Earlier this week, I spent several hours at the World Business Forum held in Radio City Music Hall in NY. The event drew more than 4000 attendees from over 60 different countries. By any measure, it is easily one of the largest business conferences in the world. Listening to powerful speakers like Jack Welch, Al Gore, James Cameron, and Jim Collins talking about the future of business reminded me of the powerful link between the business world and life. The best speakers were the ones who showed how a philosophy of business could also be one with the relevance to transform your life and make you a better person.

A sense of hope is the most powerful feeling that anyone can leave an event with – and to me that was the biggest thing that the World Business Forum speakers offered up throughout the event. These ideas were at the intersection of living your life and being successful at business. As one of the lucky few who had a chance to hear these in person, this is my chance to share them with all of you.

1. The Importance Of Failure

Google's famous mantra is to "fail fast and fail smart." In fact, the importance of failure came up as a recurring theme for several speakers. Jim Collins, author of Good to Great (and a brilliant public speaker) talked about this in relation to one of his biggest passions: rock climbing. To coin his phrase, he spoke of the difference between failure (not trying your hardest and failing) and "fallure" (trying your hardest and doing all you can, but failing anyway). The most important thing was to fail trying so you could learn and move to the next challenge. James Cameron, Director of Avatar, echoed this idea when he shared that if you can create an atmosphere where it is ok to fail, you actually find that people will fail less. The importance of failure is often underappreciated – except by those who understand their success comes because of it.

Jack Welch perhaps notoriously talks about nurturing the top 20% of your team and getting rid of the top 10%. He offered more context on this view during the event by pointing out that this top 20% needs to work to stay in that group, and others can move up. The central point he shared was that we spend too much time worrying about the problems and not enough nurturing the top talent and helping them to succeed even more. Ranging from talking about how unions were killing the economy because they encouraged a "level field" without the chance to recognize performance, to his views on why the Obama administration was "anti-business" – his interview was a fun and slightly controversial interlude to the event. The undeniable truth about Jack Welch, however, is that he ran an organization at GE that was masterful at nurturing talent – which is why so many CEOs today count GE among their previous management experiences.

3. Build A Platform, Change The World

At several points during the event, the Bloggers Hub (which included more than 60 live bloggers, including myself) on the 3rd floor Mezzanine received a mention from the stage. Al Gore noted that "the hope is with the bloggers in the balcony that soon will rival that of television." Charlene Li also paid a visit to the Blogger's Hub and mentioned the group on stage as being the ones who will spread the ideas of the conference farther than the walls of the actual event. At more and more events, the organizers are opening up the doors to bloggers, recognizing that the contribution of content creators can help them to spread the messages of their event farther and add value to the experience both for attendees who are there and appreciate the online recaps, to driving enthusiasm among virtual observers who may become paid attendees at a future version of the same event or a related one. The point here is that having a platform to share your ideas continues to grow in importance, and sometimes can be your ticket to participate in world changing discussions and add your voice to inspire others.

4. Give Up Control, Stay In Command

One of the sessions I was most looking forward to was Charlene Li speaking on the topic of social networking – mainly because I was interested in hearing how she would bring this niche topic to life for people who don't necessarily live their lives on Twitter and check into every place they go to on FourSquare. As expected, she did a masterful job of making the idea of social networking more than just hype and relatable to everyone – no matter what their biases about it. The most powerful analogy I took from her presentation was when she asked everyone to shake the hand of their neighbor sitting beside them, and then asked them to quantify the ROI of that handshake. Not everything that matters can be measured and as you enter the world of social media, forget about trying to control it because you can't control relationships. But you can lead them in the right direction – and this is how to succeed.

For more insights and recaps from the World Business Forum, here are a few links worth visiting to read more from all the 60+ bloggers and content creators who attended the event and shared their thoughts in real time and afterwards about the most valuable insights from the event. Feel free to suggest others and I will happily add them to this list below:

5 thoughts on “4 Insights From The World's Biggest Business Conference”