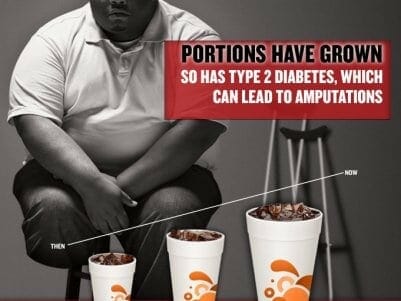 Consumers want what they want. How often have we heard this used as a defense for selling just about anything, whether it is good for people or not? The fact is, people like unhealthy products – and they get angry when anyone tries to deny them the chance to buy them. This is particularly true in America, where New York Mayor Bloomberg’s call for a ban on sales of super-sized portions of soda last year was met with all sorts of criticism and negativity before being ultimately approved. This “make the consumer happy at all costs” mentality has been around for hundreds of years. After all, if you have a product that people like, why should you stop selling it?

This evening Coca-Cola is set to air a series of two minute ads that will address the issue of obesity that it has become a central player in. Coke is a favourite target for critics who blame the obesity epidemic in America and many other countries around the world on over consumption of sugary sodas. For anyone following the beverage industry, this sort of communications effort is probably not a surprise to see. For an industry plagued with criticism, eventually someone needs to respond and Coke is a natural choice. I have met and worked with several people at Coke in the past and the company is one that is genuinely committed to changing the world in many positive ways.

But the question from a marketing point of view that should be more interesting is why is Coke doing this right now? A masterful marketing organization like Coke doesn’t launch this type of initiative without carefully considering the strategy behind it. Here are a few reasons that today and this week are the ideal moments in time for Coke to take a stand on the issue of obesity:

Watch the video below: