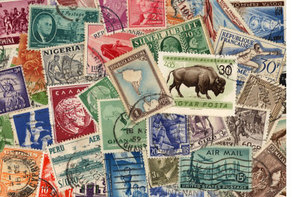 Raise your hand if you know what philately is.  OK, major geek points for you if you got it right.  For the rest of you, philately is the fancy name for the study of stamps, commonly related to the hobby of stamp collecting.  Last weekend I was in Lima for a good friend’s wedding and passed a post office that shared the following tidbit which my (limited) spanish was surprisingly good enough to translate:

More than 25% of the entire population of the world has collected stamps at one time in their life.

Whether you believe that statistic or not, stamp collecting has been a hobby passed down from parent to child and a way that millions of children have learned about the world.  I admit, I collected stamps as a kid.  In fact, the first place I learned the Sverige was Sweden, Magyar meant Hungary, and how to spell India in Hindi was from stamps.  It was a way of travelling around the world while staying put, learning about obscure countries that seemed made up (seriously, is there really a Leichenstein?) and surprisingly, it also turned out to be a way I learned about business.  My brother and I used to check out the stamp pricing guide from the library and be amazed at how much we were worth.  Along with my Topps Art Monk rookie NFL card, my total net worth was more than $50 before I hit the age of ten.  Thankfully, I’ve nearly doubled it since then …

But jokes aside, what is the power of stamp collecting that drives countries around the world to still use stamps as a key marketing tool for their countries?  In some small countries, the revenues from printing the selling their stamps to collectors around the world is a significant source of income.  It’s like printing your own money, almost.  Here are a few reasons why I think stamp collecting has remained such a popular activity:

Next time you pass a post office in any country, pay attention to how they are using their philately to promote the country, cater to tourists, or commemorate moments of significance.  People there don’t send that much mail.  The stamps are just a smart hook that makes sense because it offers something unique to travelers.  It’s no wonder at least everyone’s tried it at least once.

4 thoughts on “What You Can Learn From Philatelic Marketing”