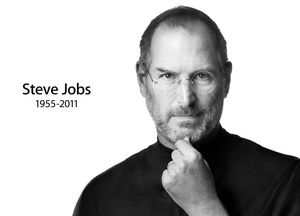 A few weeks ago I was asked an interesting question about what inspires me.  As I thought about my answer, I realized that for me it isn't a person but rather an action that I find most inspirational.  The people around the world who have an idea and decide to do something about it deserve to be celebrated. Entrepreneurship itself is the thing that I find most inspirational.

Last night as I was watching all the media coverage honoring Steve Jobs and his life, it got me thinking that perhaps his biggest impact on the world wasn't just the products that he helped create, but rather in showing the world just how much people can achieve when they are inspired. Inspiration itself can be like that – a lightning rod that takes an army of smart people and helps them create something real. To me, his power to inspire came down to three things:

No doubt there will be countless books, articles and stories written about Steve Jobs and his impact over the coming years. For me, the biggest lesson I learned from watching and reading about Steve Jobs is the power of inspiration and how it can lead people to change the world.

More posts about Apple on this blog: