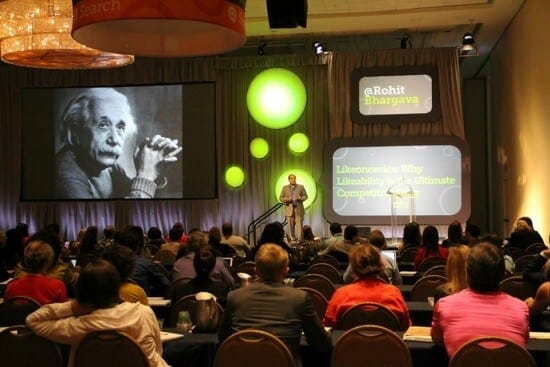 You could say I’m a lover of history.

Not the boring “memorize which King came after which King” kind of history. No, instead I love the stories that history gives us of characters that we may already know, or objects we may interact with … but seldom think about in terms of their origins. This talk shares two of my favourite stories like that.

The first is how Einstein’s brilliance truly became appreciated in his time. If you think about it, he was a humble patent clerk with ideas that challenges the status quo. So why would the establishment believe him?  It turns out he owes his success largely to one man – Max Planck.  It’s exactly the type of hidden connection that fascinates me.  Would his ideas have been appreciated or understood without Planck?

The second story I also share is about the creation of the QWERTY keyboard design and its origins as a design “optimized” specifically for one purpose: to slow typists down. And yet when someone named Dvorak came along with a brilliant redesign of that keyboard, it was mostly rejected.  Why?

Finally, I also talk about James Dyson and his invention of a new type of vacuum cleaner and why that idea – though revolutionary in his industry, also ends up succeeding.  The stories of Einstein, Dvorak and Dyson illustrate a conclusion I often share in talks that big ideas are never enough. Though we tend to over glamorize them and under value the relationships and real people that are behind whether they succeed or not.

THE BACKSTORY: We live in a business world that tends to glorify the big idea. We devote entire conferences to it, and spend millions to hire and inspire people to develop more of them. Yet all too often big ideas fail. In this talk delivered at a large User Conference for marketing software provider Vocus, Rohit shares a combination of stories to illustrate why the big idea is never enough – and what success really takes is the right relationships.

WHAT IT SHOWS (FOR EVENT PLANNERS + SPEAKING BUREAUS): One of the techniques Rohit often uses that audiences rate highly is his ability to integrate interesting stories from history as a way to explain something happening in the world of business or consumer behaviour today. This talk, for example, shares the story of Einstein’s unlikely first champion (Max Planck) and why the modern QWERTY keyboard design was actually invented (hint: it was NOT to make us more productive).

To watch more videos, visit my full channel at https://www.youtube.com/rohitbhargava.