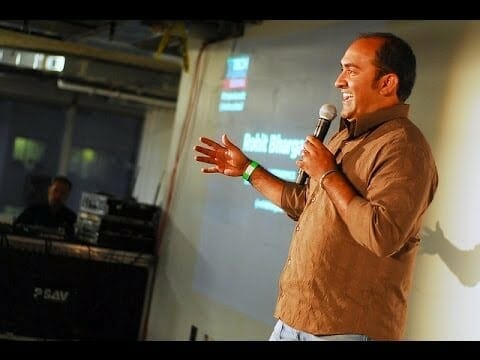 In the second installment of my Tuesday Talks, I wanted to share a story from a presentation from about a year ago that I delivered at a Tech Cocktail event around the time of launching Likeonomics.  The talk ranged on a bunch of topics – one of the rare chances when I’m asked to just get on a stage and talk without preparation.

The story featured in this talk is about my first and biggest failure as an entrepreneur … trying to start a directory website for restaurants in the DC area back in the late 1990s; failing and then moving to Australia and building a new career there:

THE BACKSTORY: Every entrepreneur has his or her fair share of failure and in this irreverent talk Rohit shares his story of founding the first ever restaurant directory website for the DC area back in 1997, why it failed and how it led him to his first big break living in Australia. The full talk was under 20 minutes, and delivered as part of a cocktail networking event to several hundred startup founders and social media enthusiasts.

WHAT IT SHOWS: While most events Rohit speaks at are large business audiences, he is equally comfortable entertaining an audience having cocktails at an evening networking event. The casual style of this talk (with scratchy audio and low video quality to complete the effect!) is filled with stories and delivered without visuals. It is a different style Rohit sometimes uses when serving as a host or emcee for an event along with delivering a more traditional keynote talk to connect with audiences in a less scripted and more human setting.

2 thoughts on “Tuesday Talks: My Biggest Failure As An Entrepreneur | A Marketing Keynote Presentation”