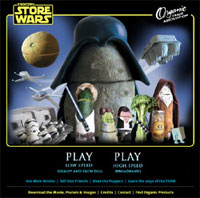 The first component of eAdvocacy is getting your issue on the radar screen.  Piggybacking on the release of the new Star Wars movie, a viral campaign supporting organic produce offers a new take on eAdvocacy with a Star Wars parody at  https://www.storewars.org/flash/.  Produced by the same team that developed the award-winning "Meatrix" about the true story behind animal treatment at meat farms, this site is another strong viral effort to build awareness of a somewhat stale (no pun intended) current issue … pesticides and chemicals used on corporate farms.

The site uses characters like "Dark Tater" and "Chew-Broccoli" to make its point encouraging users to choose organic fruits and vegetables and reject the produce from large corporate farms.  Clearly, the smartest angle on this eAdvocacy piece is using the marketing dollars of Hollywood to help build awareness.  We face similar challenges on all of our non-profit work.  How do we get viral traffic with no marketing or advertising budget?  Sure, humor helps to build buzz, but Store Wars shows that timing can be just as important.  What are people interested in today?  What’s getting coverage in the media?  And what has the most marketing dollars behind it?  Yahoo’s buzz index, focuses on what people are actually searching for.  It’s worth checking.  The creative concept for the next big eAdvocacy campaign could be there.