In a great post over at PSFK – Piers publishes the content of a conversation he had with Julie Cordua, the VP of Marketing for the often talked about Product (RED) social marketing campaign.  In case you’re among the few people that hasn’t seen the campaign, it created waves last year by introducing a for-profit model where companies could sign on to create products that they would sell for profit that became part of a line of items furthering the Red brand and donate a portion of profits to The Global Fund.

According to Cordua, campaign partners include Gap, Motorola, Converse, Emporio Armani, Apple and American Express (in the UK Only).  The most iconic of partner marketing to date in the US has probably been The Gap, which has featured print ads of T-shirts with such catchy phrases as "Empowe(RED)" and "Admi(Red)" and my personal favourite: Desi(RED) … which will certainly become the T-shirt of choice for all those Desis out there. 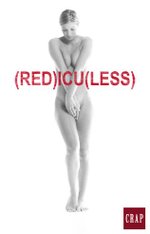 Yet as Piers and PSFK highlighted, among others – the model may not be effective in leveraging what is presumably a huge marketing spend (perhaps hundreds of millions of dollars) for companies like Apple, Motorola and Gap on their (Red) products.  As the counter argument says, wouldn’t it have just been better for all these brands to donate funds directly to the Global Fund instead of launching the Red campaign?  I even got an email earlier this week from Ben over at WPIWeb pointing to a site they helped put together called BuyLessCrap.org which issues a challenge to folks to donate directly to The Global Fund (and other charities) rather than giving their money to companies who will pocket some profit and only hand over the difference.  These are admirable efforts and anything to spark a debate about the level of assistance the Western world is providing to stop the Aids epidemic is good news, in my opinion. 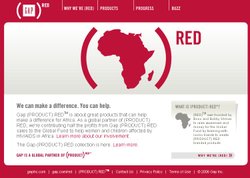 At the end of the day, I think where you stand on this comes down to who you think the Product Red campaign is targeted at.  As anyone who has done significant social marketing will tell you, it’s not that difficult to get civic minded people or issue advocates to care about a cause and act to donate or contribute to events.  These are the small group of people that do much good in the world.  The real challenge is getting the person who would never ordinarily think about donating to charity to think about it in a different way.  My view on Product Red is that this is who it targets.  Whether they manage to donate $11 million dollars or $100 million, I think what the brand represents could ultimately be a good thing.  Weaving social marketing and issues into the decidedly profit centered worlds of retail, consumer electronics, and fashion is a new idea and many people won’t agree with the business model, rightly pointing out that we could do so much more good buy simply giving the money to charity directly.  The real issue is that there is a significant percentage of people in the world that just won’t be part of something like this either because they don’t know about it, or are not inclined to participate.  If Product Red can get some of those people involved and raise money in the process – I think it has to be considered a success.

As a follow up, I’m tagging Nedra, Craig and Alison to talk about this – as I’d love to hear thoughts about it from the real experts …