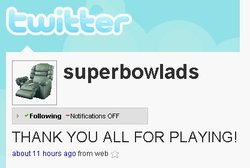 Last night during the big game, I joined a large group of marketing and social media types to share some live thoughts about the Super Bowl ads through Twitter (sending them to the @superbowlads user account).  The aptly named "Twitterbowl" consisted of lots of folks live rating ads and sharing some feedback about the ads live during the game.  Voting on ads in real time is nothing new … however doing it and reading the thoughts of my other contacts during the game was an interesting way to experience the ads.  Though I would have expected a more sophisticated commentary from the group as a whole, being marketing people and all.  Many folks seemed to just be rating ads on entertainment value as opposed to whether or not the message actually made sense for the brand, but it was still a fun experience as part of the game.

Aside from realizing that people can really have completely opposite views of what makes a successful Superbowl ad, it was also clear that all of us love to have our opinions.  Everyone decides what is most entertaining for them, but since this is a marketing blog, I’m going to go with my own top 3 Super Bowl ad list based on strategic value for the brand.  So, here is my list of the top three 3 strategic ads that were creative, engaging, messaged properly and could actually have a real impact in terms of sales (and only one of them made the USAToday Top 10 popular ads list):

Of course, I am tough on these ads because I am putting the often forgotten lens of strategic value over deciding what was a good creative execution.  If we just looked at entertainment value, which I am sure lots of polls are doing today, the winners were probably a few of the Bud ads and the Pepsi Night at the Roxbury spoof.  Worst ads?  They have to be the Gatorade/Vitamin Water/Sobe combos (seriously, can anyone tell them apart?), the CareerBuilder nasty exploding heart ad (they should have stuck with the monkeys), and the singing Comcast ads (which, thankfully, most of the country probably didn’t see).  Big props to Dell and Lionel also, for being the only advertiser (that I could tell) to actually be part of the Twitterbowl.

Oh, and it was a great game to watch too … congrats to Giants fans everywhere.  If it can’t be the Redskins, it might as well be the Giants doing the NFC East proud.

4 thoughts on “Notes From the Twitterbowl: The Top 3 Strategic Super Bowl Ads”