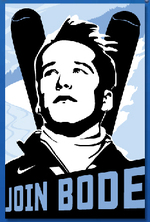 Using celebrity spokespeople can be a tricky thing – especially when it comes to athletes and sports sponsorships.  Nike and Visa both learned this with their ill-fated Olympic sponsorships of Bode Miller and Lindsay Jacobellis, respectively.  Both turned out disappointing performances, with Bode Miller coming off as a total ass yesterday with his declaration that he "didn’t really want to win" at the Olympics … and Jacobellis having the choke of the century to lose the gold in her snowboarding event by falling with only a few meters of snow between her and an uncontested finish line.  Yes, sports celebrity sponsorships can be a tricky thing.  For Visa, they had other eggs in this basket – the Jacobellis spot was just one piece of their strategy.

But Nike pushed Bode and the "Bode way of life" hard – even giving him a Che Guevara-esque silhouette (above).  They launched www.joinbode.com before the Olympics even started, featuring a series of videos making Bode into a Zen-like character offering his views on nature and happiness.  Bode was the do-it-my-way champion.  He was a winner.  JoinBode.com was a chance to join him – another "Be like Mike" crusade.  But then he lost. And didn’t seem to give a sh*t.  And made excuses for losing. This is the point when a program like Nike’s can rapidly turn into failure.  Except, right after his final loss, the TV spots featured him talking about what it meant to win no medals.  Perhaps they recorded a spot with every alternative before the Olympics, and just ran this one … but it strikes me as a great backup strategy to manage the risk of backing an athlete who could fail.  There’s a lesson in here for other marketers: if your campaign is focused around an idiot for a spokesperson – you better have a Plan B.