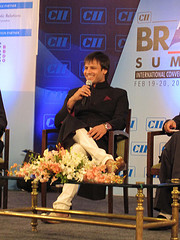 Last week I had the opportunity to travel to Bangalore for a Brand Summit event that featured many marketers, communicators and even a Bollywood star talking about the future of marketing in India as country goes through what the conference termed as the "era of discontinuity." With a ballooning population, growing Internet penetration, arguably the largest mobile phone market on earth and an entrepreneurial culture – India is at once a bewildering and maturing market for all things social. On the streets of India, word of mouth marketing and old school lessons are actively driving commerce. In businesses, the hot topics are similar to what they are in the US or elsewhere … how can your brand reach consumers who are increasingly placing their attention elsewhere and getting progressively better at ignoring you.

On answer that has risen to some level of prominence in India is the use of celebrities in marketing. You could argue that celebrities are popular everywhere in the world, but in a country that release more films in an average week than most countries do in an entire year, the rules are slightly different. In India it is not uncommon to see a Bollywood star's face on everything from facial tissues to pens. Celebrity is used to connote trust, and in a culture with many different socio-economic classes (they even have names), the only way that marketers can often reach across these levels is with celebrities that many people recognize.

In an illuminating panel filled with journalists, filmmakers, marketers, creative directors and one celebrity (Bollywood Actor Vivek Oberoi) the conversation turned to a in-depth discussion of the role of celebrity in marketing in India and whether it was indeed a necessity, or whether it has become a "crutch" for the lazy marketer who doesn't want to do any real work so they just hire a celebrity and consider their marketing efforts complete. Here were some of the biggest takeaways that the conversation raised for me:

Note: This post was originally published on the Ogilvy 360 Digital Influence blog.

4 thoughts on “Marketing In India: Do Celebrities Really Matter?”