There is usually only one situation when travelling by air that warrants travellers banding together in a community.  Unfortunately, it is usually when they unite in dissent and outrage about the way they are being treated by airlines.  Apart from the "community" of frequent flyers, the airline industry has typically done a terrible job of fostering social interaction between passengers, which is why often this interaction is happening on communities like FlyerTalk.com.  This and other sites like it are dedicated to travellers sharing tips with one another on how to manipulate the system, travel smarter for cheaper, achieve preferred status in frequent flyer programs faster, or simply talk about the airline industry from a traveller’s point of view.  Again, the community is talking around airlines and not with them. 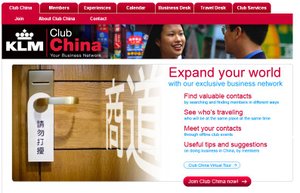 KLM has a different vision, launched through several social networks – including ones targeted at entrepreneurs and business travellers in China and Africa, as well as a robust social network all about golfing where travellers can enter their destinations and scores, use miles to purchase golf related merchandise, and even book golf get togethers with other travellers that happen to be in the same location.  That an airline would launch a social network is interesting in itself.  The way that KLM has done these (and presumably will do others as well) offers some interesting lessons to other struggling airlines on how to better connect with customers by using social networks:

There is more KLM could be doing – such as integrating these networks more closely into their booking and seat selection process, or offering travellers the chance to bring their networks and invitations into popular business contact sites like LinkedIn.  Regardless, the networks represent a wonderful new step in how airlines foster relationships with their customers and go beyond simply innovating the interior of their business cabins every six months with something new in order to stand out.