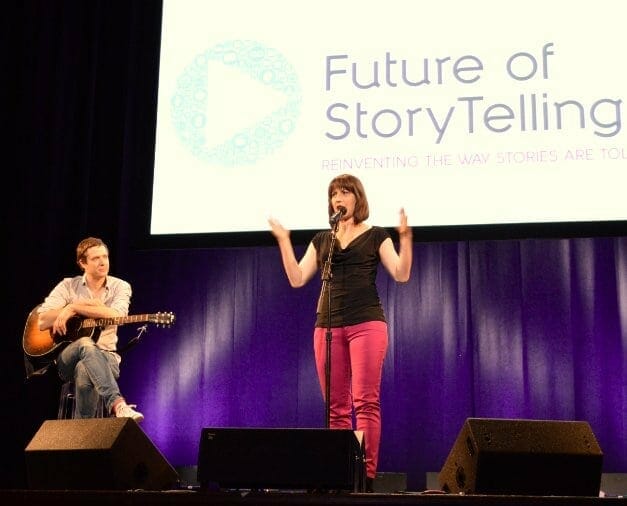 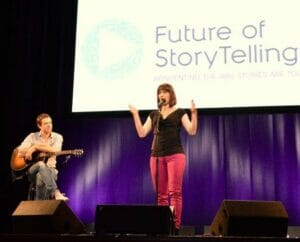 Walking off the ferry into Snug Harbor on Staten Island, there was a big motorcade of cars and police standing there. It was the first and most obvious clue that this first ever Future of StoryTelling Conference might not be the same as any other business conference. As the crowd filed into the auditorium, Al Gore was among them … just one of the many influential participants at this event put on by media pioneer Charlie Melcher. The earlier clue that every attendee received was an email outlining their “homework” before the event, which involved watching about 15 films from visionaries and influencers like Tim Kring, Damian Kulash, Jake Barton, Margaret Robinson and others. 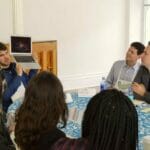 The event itself features minimal speaking from stage, and more roundtable discussions with each influencer throughout the afternoon – a “flip” from the traditional conference model. The morning on stage featured Damian Kulash from Ok Go playing guitar accompaniment to two storytellers from The Moth, a nonprofit group dedicated to storytelling. The day is one of those that will feature more soundbites and smart thinking, but in an effort to share some of the more profound lessons I wrote down after watching the videos and listening to conversations, here’s my top ten list (so far):

1. “It’s not likely that someone who has taken the relatively safe route and worked at an ad agency is actually a better filmmaker than a struggling filmmaker out there today.” (Damian Kulash)

As an ad agency guy (who never aspired to be a filmmaker, by the way!), I appreciated the wisdom of this because I have worked in plenty of places where creative directors imagine themselves to be rock stars. Damian is an actual rock star, and his bigger point was the the ideal creative brief should “not be prescriptive, but descriptive.” As he goes on to share, “Creative boundaries are what cause your best ideas. A blank canvas is overwhelming.”

2. “You are tethered to your fan base by a very thin thread. And it can be severed by any number of false moves or missteps.” (Tim Kring, Creator of Heroes)

There was a point in 2009 when Heroes was the #1 most downloaded and #1 most streamed show on the planet. A few short months later, NBC canceled the show because the ratings had declined. It was perhaps the first television show in modern history to be canceled for being too popular … only on the wrong media channel. As Kring shares his multi-screen vision of the future of storytelling, his own tale of building an audience of 10 million fans is both a sign of our natural interconnectivity (as he describes it), as well as the difficulty that true innovators experience because there is simply no precedent for what they are doing.

3. “You Are Not The Hero, You Are The Mentor.” (Jonah Sachs, CoFounder & CEO – Free Range Studios)

If you are a fan of animated message driven videos, you may have seen Jonah Sachs work previously on campaigns like The Meatrix. His fundamental point he makes in his talk on storytelling and his new book that inspired the talk is that we (as brands) need to fundamental change the way that we often think of our role in the stories we tell. It is easy to tell a story where you turn yourself into the hero. The best stories are the ones where the audience can imagine themselves as the hero. Your ideal role is simply to be the force that helps them achieve what they want. And if you think about it, that’s the perfect way to describe what brands should do in the real world as well.

4. “One of the greatest mistakes people believe is that technology changes the essence of the audience, because it doesn’t. It changes the way they participate.” (Brian Seth Hurst)

How often do we see this mistaken perception that just because people are online or interacting with technology, they will change their fundamental behaviours? Brian Seth Hurst has four levels he uses to describe what he calls the “participation continuum”:

Level 1 – Here’s the story (one way in a vacuum, how many have I sold – broadcast)
Level 2 – I’m listening (realization from storytellers that people are talking about the stories – John Chu model)
Level 3 – My world and welcome to it (characters and the world they live in is so clear that there is a way for them to come into it – Tim Kring model)
Level 4 – Take it, it’s yours (the storyteller gets to bare witness to the fans creativity)

Together, they paint a picture of a newly social world where “You know you have connected and you have been heard and it is very very powerful.”

The intersection of data, conversation and art is a major topic – and one that is inspiring artists, data scientists and many others. Aaron is at the center of this, through his role at Google and background at MIT. Data is a big topic of conversation throughout the day, because of the central role that storytelling takes in adding meaning to data.

6. “When you use multiple media, sometimes you’re just expanding a story. But sometimes you can make the story better, richer and more amazing.” (Andrea Philips, Transmedia Writer and Game Designer)

Anytime you mention transmedia, the easy thing to think is that it is simply taking content produced for one screen and extending it onto another. The far more powerful way is what Andrea speaks about in this quote … that it can add something unique that wasn’t possible before. It helps to fill in the details, so we can get more immersed into the story experiences we are having.

7. “Make a larger narrative to bind us all together – that’s what collaborative storytelling is. It can be a better way to understand the human experience.” (Jake Barton, Founder – Local Projects)

Marketers have become fond of using the word “curation” to describe their act of bringing (mostly) online content together. The original curators, though, are the ones who use that word to describe the act of bringing together artifacts and items of historical or cultural value together. Jake Barton is the founder of a group described as “America’s foremost media design firm for museums and public spaces” and his new collaborative design for the 9/11 memorial museum which features the experiences of thousands of real people, making it one of the most truly interactive museum spaces in the world.

8. “How can I spark the imagination in those formerly known as the audience? It’s not about perfection, it’s about iterating. It’s about putting it out there and seeing how people interact with it, and refine it and move forward.” (Lance Weiler, Story Architect and Filmmaker)

A mantra that Silicon Valley entrepreneurs know well … you don’t often hear about iterating, testing and changing when it comes to storytelling and filmmaking. In his video, Lance talks about a very cool experiment with 5th Graders to awaken their imagination and work together to tell a collaborative story that maps to their curriculum and becomes part of their schoolwork. Not to mention helping create what is probably the coolest 5th grade class ever.

9. “Customers don’t mind the story if they really feel like you’re doing it for them.” (Richelle Parham, CMO of eBay)

How important is the story to actually making a sale? To find the answer, eBay commissioned an interesting social experiment where they worked with a group called Significant Objects to create stories for everyday (and relatively useless) items. The aim was to see if people would actually pay more for story value as opposed to “real” value. The answer was a resounding yes.

10. “Games offer a place where the world works the way your mom always told you the world was going to work. If you try hard, if you practice, and if you don’t give up you will ultimately be successful.” (Margaret Robertson, Game Designer)

Games have a fascination for us that we are only now beginning to unpack and rediscover. Of course, people have played games for thousands of years, but now we have ability to take those lessons and apply them to elements of every day life. Using games to inspire behaviour change. Creating “gamified” experiences to help sell products or deepen customer loyalty. But there are a few people who manage to explain the basic human qualities that make games so powerful. Jane McGonigal is one of them. Kevin Slavin is another. After watching this video, you will be tempted to add Margaret Robertson to that short list as well.

2 thoughts on “How To Tell Better Stories: 10 Profound Lessons From The Future Of Storytelling Conference”