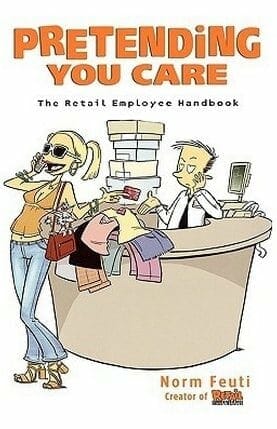 I could tell you that it’s a misconception that marketers spend a lot of time trying to figure out how to sell more stuff to more people every holiday season. Of course, I’d be lying.

Every holiday season, brands scramble to find new ways for people to excitedly part with their money is in full swing – with mall Santas and all. The day before Black Friday, the TV ads for early deals, discount finding websites, and price locator apps are tough to avoid these days. Even for those who don’t make a regular habit of shopping (like me!) can’t help but be romanced by the promise of $250 HDTVs and 85% discounts on historically overpriced items.

Yet among the rampant consumerism is a victim that is starting to get more and more media attention as Black Friday approaches – the lowly retail worker. Paid by the hour and often forced to cut their own Thanksgiving holidays short in order to show up for work, the people working in retail have a tougher job than anyone as frantic shoppers fall over each other for the best deals. They have to put up with cranky customers, a lack of resources, undesirable working hours, and criticism for things that often aren’t their fault.

So what’s a human empathetic customer to do? Boycotting the sales probably won’t work – because those retail workers will need to show up whether you do or not. And most of us probably don’t have the time to launch our own retail workers rights programs. Instead, here are three ideas inspired by one of my favorite satirical books on retail culture called Pretending You Care by cartoonist Norm Feuti. Not only could they help you transform one worker’s overall happiness this crazy holiday season … but they might just give you some much needed karma in the process.

“A flawyer is a customer who uses their uneducated misinterpretation of the law in an attempt to make a point or get what they want. If I run an ad that says my shoes are handmade by skilled craftsmen in Italy, but my shoes are really made on machines by children in Pakistan, I am guilty of false advertising. If, on the other hand, I run an ad that says I have toothbrushed on sale, but I sell out of those toothbrushes before everyone in the state has a chance to come and buy one, I am only guilty of poor planning or low expectations.”

Yes, sometimes products run out and not every store will have an in stock guarantee. But if you were trying to get tickets on a flight and it was sold out, you wouldn’t ask the pilot to find two more seats or threaten to sue. Instead, you’d move on, get a different flight and get over it. Stores run out. It’s ok. You will find some things you want and some things you won’t. Get over it.

“Inane questions like ‘How long will these crayons last?’ should be answered in an authoritative fashion with whatever big, fat whopper you can come up with on the fly. [For example] – ‘Under average use, you’ll get two to three years out of a box, but heavy coloring can reduce that to as little as fourteen months.’ I once had a customer ask me what kind of ‘gription’ a particular pair of boots had. Without hesitation, I told him that they had a gription rating of eight. He accepted that answer and seemed genuinely impressed with the rating.”

The fact is, many retail workers won’t have all the answer about products they only learned about a few weeks ago. And they certainly won’t have the answer if you choose to ask stupid questions. The smart workers, as Feuti suggest, will become adept at making stuff up on the spot. Sometimes it will be entertaining. Sometimes it will just be an answer that you know sounds wrong. If you get one like that, accept it and move on. Maybe ask someone else. There is no upside for them to withhold information – so persisting is like asking a tourist for dinner spot recommendations in an unfamiliar city. No matter which words you choose, you probably won’t get a great answer because they just don’t have the information you are asking for.

“Philosophers are customers who try to bestow some hackneyed wisdom upon you when they catch you in a bad mood. ‘If you don’t like your job, you should get a different one.’ You can quickly teach this kind of philosopher to mind his own business by confessing that it’s really some made-up personal problem that’s making you irritable–the more uncomfortable the better. [For example] – ‘sigh, it’s not really the job that’s getting me down. I got my girlfriend’s mom pregnant and I just don’t know how to break it to her. What do you think I should do?’ Not only will it send them packing, but the discomfort you cause them will make you feel better.”

If there is a sad fact about retail, it’s that you’ll rarely meet a worker with the same wit and humor as Norm Feuti (who spent many years as a retail worker getting inspired to create his cartoon and write the book). Still, the lessons from his book hold true – no one wants to hear about your amazing philosophy of life in a retail environment. Least of all when it’s busy and there are lots of customers.

It was several years ago that I first read Pretending You Care, but it changed the way I thought about being a consumer. The day before Black Friday seems like the perfect time to bring back some of those lessons.

Of course, you might just forget about all this when staring at the last of the insanely priced HDTVs left on the shelf.  Just remember being kind always matters – even if you don’t believe in the big guy who tracks when you’re naughty or nice anymore.