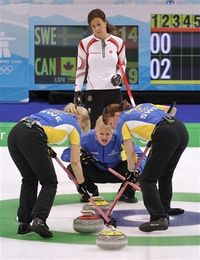 Perhaps you've managed to catch some coverage of the Winter Olympic sport of Curling over the last two weeks during the Vancouver Games? The sport has been covered almost nonstop on CNBC here in the US and been enough of a sensation to even have an entire episode of The Simpsons (arguably America's most popular TV show) dedicated entirely to it. Even more impressive is that the sport has managed to accumulate all this attention in spite of three relatively big strikes against it:

This is quite a mystery if you were to consider it in marketing terms (which, of course, I can't help doing). A sport that no one has grown up playing, with little inherent tension or excitement and a national team that is lacking (at current count, they have played 9 games and lost 7 of them) still manages to be among the most popular Winter Olympic sports in the US. Why?

The answer, I believe, comes from an interesting phenomenon that was profiled in another popular American television show – Seinfeld. In one episode, the character George Costanza talked about his ability to be initially annoying and irritating, but to grow on you until eventually you can't stop thinking about him. A similar phenomenon accounts for that moment we have all had where we can't get that awful song out of our heads, but eventually start singing it and even (on some level) liking it.

Your first reaction to curling was probably one of misunderstanding, or ridicule. Let's face it, it's an easy sport to make fun of. But as you see those guys (or girls) furiously sweeping the ice in front of that granite stone – you can't help watching. Yes, sweeping is actually an Olympic sport and as the ratings will show, it's one of our favourites here in the US. The marketing lesson here is simple: Sometimes being sillier than anything else can actually make you the most memorable (and successful). Need more proof? Just look at the success of the Snuggy.

4 thoughts on “How Seinfeld Predicted The Strange Popularity Of Curling”