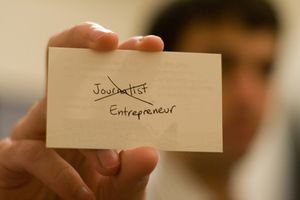 Think about the best article you read last year. The hard hitting, excellently researched, insightfully written article that you just couldn't put down. Now think about how much money you spent to read it. Was it in a magazine you subscribe to? Or perhaps a website that you accessed and read for free? For every conversation anyone starts about the future of journalism, the question that seems to follow closely behind is: what does the new business model for journalism needs to be in a world where the average citizen is increasingly expecting journalism to be a service provided for free (or at least, subsidized by someone else).

Over the past few years, every time I spoke at a gathering of local newspaper professionals at the American Press Institute (API) or participated in a journalist-centric event from an organization like the South Asian Journalism Association (SAJA), the signs of worry in the industry were clear. A solution has started to emerge that is not only making waves in the field of journalism today – but also has the potential to reinvent the way that we consume and share media with one another.

Entrepreneurial Journalism describes a field of media where journalism is the underlying discipline upon which to create content-based businesses and services that can make money. Rather than the popular view of journalism as a type of objective professional public service to be provided to the citizenry of the world – entrepreneurial journalism offers the chance to think of content creation in business terms. As it gains popularity, this field also has the potential to change the way that we find and consume information, and change our world in the process. Here are a few ways it is already happening:

This is a link to an interesting panel discussion from the Carnegie Journalism Educators Summit last year about the future of Entrepreneurial Journalism as well, for those who are seeking more context and information.

*Note: Best wishes to Jeff for a speedy recovery, as he recently shared on his blog that he is now once again fighting cancer. His work and thinking have been a big inspiration for me and many others, so I wish him the best in his new battle and am sure he'll emerge on top as he has before.

4 thoughts on “How Entrepreneurial Journalism Will Change Our World”