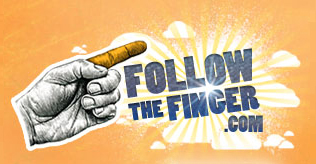 Walking through the streets of Old City in Philadelphia this weekend, there were people standing in line to get into clubs telling each other to "follow the finger."  At first I thought it was some college student slang, or a Philadephia thing – but looking around I realized – they were actually responding to a billboard ad on a nearby bus stop that pointed you to followthefinger.com.  I’m a sucker for curiosity marketing like this, I can’t help checking it out.  It turns out www.followthefinger.com is a viral marketing site for Butterfinger, where they encourage visitors to "give the finger" to friends.  The site makes the finger into a Confucious-like character, with it’s own philosophies, including such gems as "the finger knows milk isn’t funny unless it’s coming out of someone’s nose."

The funniest part of the site is a video parody of Indian Call Centers – the "Finger Fun Call Center" where they are dedicated to the "opposition of the thumb."  Site visitors can send the video to friends, or submit their own philosophy.  As a marketer, I admire Nestle’s willingness to equate the Butterfinger with "the finger" – even if their lawyers kept the site from automatically publishing user-submitted philosophies (something that could have made the site even more viral).  In all, it’s a brilliant concept, strong execution, and ties well to the brand.  Best of all, unlike many viral marketing campaigns, using "the finger" makes it easy to remember what they are actually advertising.   Sadly, in the world of viral marketing to teens, this alone makes the site stand out.