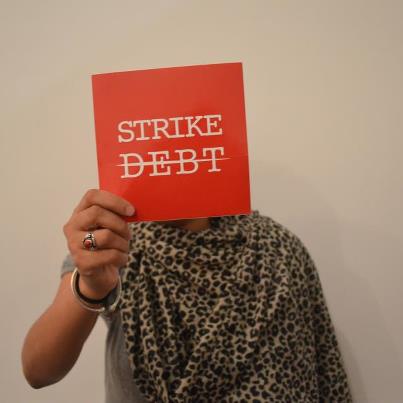 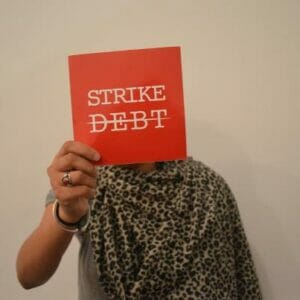 It’s the holiday season and we’re in that delightfully slow week between Christmas Day and New Years where many of us have a chance to step out of the craziness of daily life, forget about work and just take a lazy little break. For many people in the world, however, this week won’t offer much relief because they have something ugly hanging over their heads. For some, it comes from unexpected medical bills. For others it comes from doing what was necessary to finish their education and pay for it.

I’m speaking, of course, about debt – the one constant weight that many people struggle with for months, years and even decades to emerge from. By some estimates, over 77% of American households are in debt … and 1 in 7 Americans is currently being pursued by a debt collector. And this situation is a global one far beyond the US as well. Luckily, as with many financial systems today, there is a big loophole. When banks are afraid they cannot collect the debt owed to them (or it becomes too costly to follow up on), they sell it to a secondary market of debt collectors. The debt collectors buy this debt from banks for pennies on each dollar, and then aggressively pursue people to try and get them to pay it back.

So, an ingenious new nonprofit effort called StrikeDebt was created by a team of attorneys and as an offshoot of the Occupy Movement. Their latest effort was built to keep debt out of the hands of collectors by using donations to buy it instead, and then abolish it. This campaign, called the “Rolling Jubilee”  is described as “a bailout of the 99% by the 99%.” Here’s a short video introducing the idea: 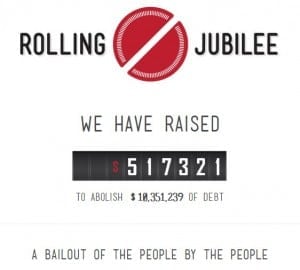 So far, they have raised over $50,000 – which is technically enough to forgive more than $10 million USD of debt. The broader idea, though, is that people will choose to donate money to help perfect strangers – even when no one is exactly sure of who is being helped (since specific individual debt is not forgiven, but rather the money is used in batches to buy bundled debt from many people).

It is this karmic element of the Rolling Jubilee that I find most intriguing this holiday season. Maybe you can’t buy forgiveness for yourself – but the fact that you can donate to buy it for someone you don’t know is the scaled pay-it-forward equivalent of paying the toll for the person behind you in line. You don’t need to see their face to know you did something that might change someone’s day – or maybe even their life.