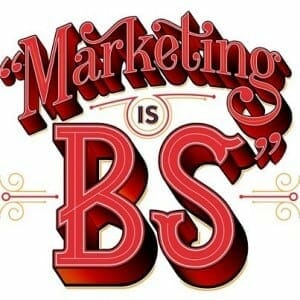 I was on a short flight from NY back to DC yesterday and opened a copy of the NY Times to find a full page ad with the simple declaration “Marketing is BS.” Beneath that attention-grabbing headline, Adobe called this “Myth #1” as part of their campaign to speak to marketers and business people about how to measure results more effectively. The ad was targeted to marketers, but it has an unintended side effect … a lot of people agree with the so-called myth.

Despite working in marketing for more than 10 years, let me first share this rare point of view among people in my industry: a lot of marketing actually IS complete BS. One reason is because much of it looks like this recent ad from Chanel #5 featuring Brad Pitt:

The ad was mocked on Saturday Night Live and widely attacked for being an example of the worst kind of marketing excess (Chanel reportedly paid more than $7 million to get Pitt). But they are not the only offender. Anytime we hear an ad for an “all-natural” product that still uses high fructose corn syrup as a main ingredient, or see fashion ads with unnaturally skinny supermodels offering an impossible ideal of beauty, trust in business and marketing dies just a little bit more. 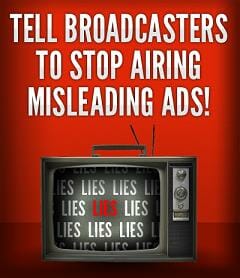 And then you have the nonstop stream of political advertising, which isn’t just reducing the credibility of business in general, but also leading to apathy and distrust of the entire role of government.  A running joke now on late night television is to remind people that unless they live in Ohio (or perhaps another swing state), their votes really don’t matter anyway.

Welcome to the modern believability crisis, where it is harder for anyone selling or talking about anything to build trust than ever before. Survey after survey proves this out every week, as we are now seeing proof of record lows in public trust for everything from media to areas of life that were once thought to be unshakeable, like religion.

So in this BS-filled world where people are less and less inclined to trust anything … how can any of us become more believable? That is the biggest question facing marketing, business, politics, religion and just about any other institution struggling to connect with people. And here are my thoughts on five priorities we need to collectively embrace in order to be more believable in anything we do:

There is a stunning bias right now towards hoping that “facts” will tell the story, both for a product or a candidate. The problem is, facts don’t move us for two reasons: first they are not emotional, and secondly, they can always be manipulated. As further proof, a cover story in the Washington Post this past weekend pointed out that though neither candidate may be lying about the facts, they are both manipulating them to tell a convenient story. People know this, and have stopped paying attention.

When Domino’s stood up in their advertising, showed focus groups criticizing their Pizza and then promised to fix it, they had a brand defining moment. It was real and it was true. The next quarter they had record sales. Both political candidates talk about wanting to connect with real people. President Obama and the White House have spent the past four years deftly releasing images like the President fist bumping a janitor or bending down so a young boy could feel his hair. Those are the moments that speak much louder than any “facts” memorized and retold at a debate.

It is easy to hide behind podiums and spokespeople. The greatest brand marketing campaigns right now all have one fundamental principle in common – they are putting people front and center. IBM’s award winning “Smarter Planet” series features real employees. Ally Bank shows real people behaving honestly and promises to do the same. Even unexpected industries like oil and gas are turning to this principle, as Chevron’s entire “We Agree” campaign shows by featuring real employees in their ads. People are what make corporations and organizations real.

Anyone can memorize some bullet points and be taught how to deliver them. The real moments that build trust are the ones that are off script. When people interact in real time, build personal connections and act like real people instead of corporate robots, they are more believable. So find a way to ditch the corporate business tone in everything you say and write, and embrace human language instead. Not only will you sound more credible, but people may actually even understand what you are talking about – which is a nice side benefit.

When something or someone is legendary, we can’t help talking about them. In part, that was the factor that has led to Bill Clinton’s soaring popularity, as well as why Apple products have succeeded for so many years. When we have an experience that is above and beyond our expectations, we can’t help but talk about it. This is the essence of word of mouth marketing, and it is also what leads to believability. After all, the more people who proactively sing your praises without your request or even without your knowledge, the more powerfully your reputation will grow – and you will be more believable and trusted as a result.

For more on this topic, tune in this evening (Thursday, October 25th) to the Stossel Show at 9pm EST on FOXBusiness where I will be a featured guest talking about political manipulation, trust in business and how any one of us can be more believable.  Other guests include Ann Coulter, Ellis Henican and Andrea Tantaros.