Who is the most influential person online? That is the tantalizing question behind the Influencer Project, a brilliantly conceived marketing campaign from Fast Company magazine dedicated to getting people to engage with the idea of online influence and pass along their participation to their entire social networks. The Influencer Project is a simple site that gets you to register with a few details, include your photo and then spits out a custom URL for you to use in all your influential efforts online. The more people you get to click on your URL, the more influence scores you can generate for yourself. (Note – the link above is to my personal URL) 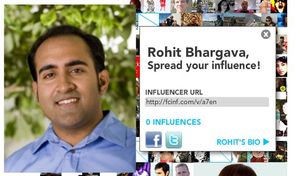 The payoff, as with many of these types of campaigns, is personal reputation and bragging rights – but for the growing ranks of people for whom social media offers an additional limb upon which to balance their virtual identities this reputation is more important than money. It could be considered a simple journalistic effort to do this, but if you look at how the project has been executed, it offered a great case study on how to use the power of the Internet to engage people and build an audience online.

Update 07/07/10 – For more context on this campaign and how it attempts to track influence, check out Amber Naslund's great post countering Fast Company on how they are confusing ego with influence. She has a great point about how this is an overly simplistic and ego driven way to track whether people have influence online. Though I agree it is an incomplete metric in terms of influence, I still think there are many marketing lessons you could take from this effort as I talked about in my post – but I found her alternate take on the campaign made me think more deeply about it and I highly recommend you read her post and decide how you land on this campaign for yourself.