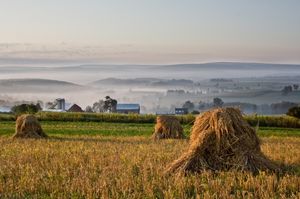 Last year on a trip back to the US from South Africa, I picked up a magazine about a topic I knew very little about. It is of the common tricks I use to learn about different industries outside of the ones I work directly with – and in this case, the magazine I ended up with was called Farmer’s Weekly.

The content was as you would expect, advice for farmers on techniques, information about regulations that will affect their industry and ads for tractors and things like that. In the middle of the issue I picked up was a feature article about what the author called the “Amish Paradox”

This paradox describes the unexpected methods that the Amish use when farming their land that are working so well that they are continuing to run their farms profitably without interruption while many other farmers are struggling to make ends meet and often going under as well.  What makes the Amish technique so special?

They rotate their crops consistently (planting different items at different parts of the yar. They never use chemical fertilizers and use something called “legume-based pastures’ to keep the fertility of their land. They tend to grow smaller fruits and veggies (which some say they are tastier to). Perhaps most importantly, they do what is called “adding value” – by producing additional products such as fresh cheese.

In an industry facing increasing pressure from large industry leaders to plant more genetically modified crops, and focus on volume above all else … the Amish philosophy stands out. What can you learn from their lesson, even if you are not in farming?