The day that Michael Jackson died, I turned to MTV for the first time in several years. Like others in the so-called MTV Generation sandwiched between the youngest of Generation X and the oldestof Generation Y, I remembered growing up in the 80s with the battle cry of "I want my MTV!" On that day, however, I was greeted not with news coverage about Michael Jackson's death – but with a reality TV series about teen pregnancies. Confused, I shared in a tweet what many of my generation had felt for years:

"MTV is officially irrelevant. Michael Jackson just died and they are airing 16 and Pregnant."

In a time where services like VEVO are taking the role of offering 24 hour music video on demand, MTV has certainly had to reinvent itself. Others have written about how the brand has evolved (changing to a newly transparent logo) – but in that evolution the connection to the music has been almost completely lost. MTV is not about music anymore and this is a disregard for brand heritage that we see often in the world of television and entertainment. TBS was once a "superstation" offering all kinds of programming and sports and now is trying to focus on comedy and being "very funny." The Food Network, dealing with its own growing pains will be launching launched a cooking channel to separate the how-to cooking style programming from other food related programming. You could be forgiven for thinking that having a consistent brand really doesn't matter much in the world of entertainment.

Today the USA Network is launching a group contributed blog tied directly to the network's overall brand positioning focused on celebrating characters of all types. This blog, called Character Approved is featuring 10 voices in a variety of categories from Art to Food and I have been invited to write the Technology/New Media category.* 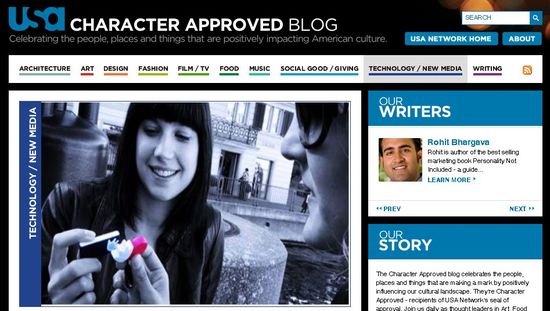 While the blogging project focuses on sharing stories of individuals, products and organizations that are having a positive impact on American culture – the marketing lesson worth repeating from this is how it is the latest effort in a branding campaign that essentially started more than 5 years ago where the USA Network created a vision for their brand that still exists and drives the brand today. 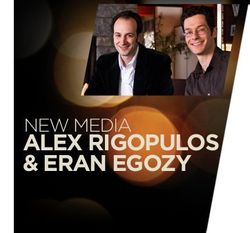 The tagline of "Characters Welcome" that you may have seen on the cable channel guides the programming decisions and recently has taken form outside of the network through programs such as the Character Approved awards and now this new blog. What I love about this guiding principle is that it allows the network to stand for something and extend beyond just the current programming of the moment. As of now, the strategy seems to be working – with USA currently placed as the #1 network in all of basic cable, with its programming being seen in 98.5 million U.S. homes. For me, focusing on sharing the stories of characters that are having an impact on the culture of America through technology and new media is a powerful idea and one that I am very excited about exploring and writing about over the coming year. Check out some of the initial posts now live on the blog and let me and the rest of the writers on this project know what you think!

*Disclaimer – I am compensated for my participation on the Character Approved blog as a contributing writer, however this and any future posts about the USA Network that I share on my blog are not compensated or scripted in any way and represent my own true opinion.