Every news media outlet and just about every blog in the universe is buzzing about Apple’s big iPhone announcement Monday at MacWorld.  It has been a busy few days of announcements with CES, MacWorld and the Detroit Auto Show all happening this week and fighting for the headlines.  As it turns out, the real headline grabber has been the rising battle between Cisco and Apple over the rights to the trademark iPhone name.  Despite it’s perfect consistency with the rest of Apple’s product line, it turns out the branded trademark "iPhone" actually belonged to Cisco since 2000, and they are also promoting a smart portfolio of products bearing the same name that quietly focus on reinventing the home telephone to include some of the features available in mobile phones.  In a blog post about Apple’s move of announcing their own iPhone, Cisco offers a thoughtful response painting Apple as the spoiled child who tried to get the name they wanted, couldn’t reach an agreement in time, and decided to move ahead with announcing the name anyway.  Paul Kedrosky has some interesting further thoughts on this, including an analysis of a part of Cisco’s suit against Apple that points to some corporate espionage-like efforts from Apple to try and steal the rights to the name. 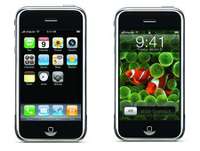 With this situation and Apple’s choice of using proprietary formats for music and video throughout iTunes (insuring purchased digital music and video cannot be played on other devices) – they continue to risk being labeled as a brilliant product design company with a flawed approach to industry openness and interoperability.  So far, they have weathered this storm because consumers that have a Powerbook, iPod, iTV and (eventually) an iPhone don’t realize this flaw.  But there are a growing number of customers unlikely to change their entire life into an "iLife" and who will continue to mix and match their technologies and products.  For these customers, Apple’s iconic product design is only one piece of the puzzle.  There are lots of anti-Mac videos on YouTube already, poking fun at the elitism and arrogance that is becoming a growing part of Apple’s brand reputation.  This controversy with the product name and Cisco is also fueling this reputation.  Ultimately, I think taking on Apple will turn out to be a smart marketing and PR move for Cisco to ride some of the media interest in Apple’s iPhone – as well as another blow to help redefine Apple by it’s business practices rather than only on the merits of their stunning product design.  Realistically, for now the product design will probably be enough to keep them ahead.  Not unlike the old Microsoft of the late 90s, in the longer term they will need to find a way to refocus their brand away from becoming the evil corporation bent on world domination – and more towards a brand that uses stunning product design to enable the creation and sharing of digital content openly in a world that will continue to realize the promise of personal media.

Update (1/11/07): In just a day, there have been hundreds of comments added to the post on Cisco’s blog explaining their position while Apple remains silent because they don’t have the same direct dialogue with customers.  The backlash is coming, and interestingly, it is coming even from Apple loyalists.  Clearly the real reason Cisco is starting this fight is because they see Apple’s next move may be to shift into VoIP and perhaps start to build out the AirPort product line to directly compete with Linksys.  It’s a fight the entire consumer electronics industry will be watching very closely.

3 thoughts on “The iPhone Controversy and Apple's Big Brand Challenge”