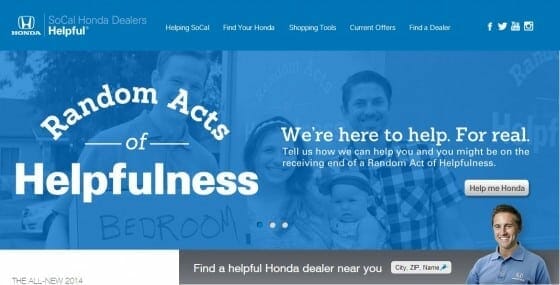 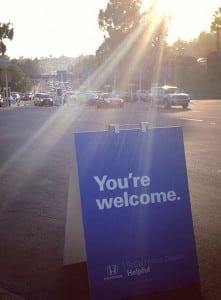 In 2007 an association of about 50 Honda dealerships based in the Southern California area launched a bold experiment.

Faced with the reality that customers generally rate car dealers among the least trustworthy people in business, Honda and their agency at the time had an idea to change that perception.  The “Helpful Honda Dealers” concept was to prove Honda Dealers were helpful by sending them out into the community in light blue polo shirts to do everything from washing customer’s cars to paying for parking all day in Old Town Pasadena while covering meters with blue Honda signs saying “It’s on us.”

Launched exclusively in Southern California with the relatively small budget of $25 million in February of 2007 – the program had an almost immediate impact. Just over a year later, AdAge magazine reported that the campaign had helped local Honda dealers close the trust gap against Toyota in their region and increase likelihood among consumers to visit a Honda dealership. As far as local dealership campaigns go, this was certainly enough to declare success.

But then the Southern California Honda Dealers Association did something that is sadly quite rare in the world of marketing. They committed to executing a good idea.

For years the campaign suffered from a lack of funds, but in 2012 Honda finally committed millions of dollars to regional advertising and gave dealer associations more autonomy to launch regional campaigns.  So the SoCal dealers were able to fund and double down on their campaign concept of the “Helpful Honda Dealers.”  Over the past two years, the campaign has produced a series of video ads like the one below:

They have also used social media frequently to share the latest news from the campaign and new ways they are helping the local community, as well as engaging with the people in Southern California who share stories of how Honda has helped them – such as the tweet below from their efforts this past 4th of July weekend to provide free gas for Honda owners:

So with all this success in their region – you might think that other large dealer associations might be rushing to take this same concept in launch it in their own regions.  Or perhaps that Honda’s national marketing team may put more resources behind making this a campaign and promotion to be rolled out across the country.  Unfortunately, neither seems to be true.

While the Southern California team of dealers work to single handedly change the perceptions of Honda dealers and connect with consumers in a smart and authentic way – only a few pioneering dealership associations like a small group of 10 Valley based dealerships in Arizona seem to be supporting the effort.

Meanwhile the Tri-state dealer association representing New York, Connecticut and New Jersey (a similarly sized region to Southern California with about 60 dealerships) is slated to receive an estimated $40 million funding from Honda for regional advertising, yet shows no signs of any integrated campaign on the same level as the Helpful Honda dealers effort from their colleagues out west.

In contrast, here’s a brand-centric tweet from their team over this past holiday weekend predictably focusing on one of their vehicles and offering no real incentive for participation:

Honda Satellite-Linked Navigation System with voice recognition: the way to find the best spots to watch the #July4th fireworks.

Aside from the larger regions, plenty of other mid sized regions like Detroit, Houston, the Carolinas, Central Florida, the Gulf Coast, and the Capital region north of New York seem to also have ignored this opportunity.

Sometimes the best ideas for a campaign come from a place where people are most deeply connected to the customers they serve on a regional level.  More importantly, those ideas may only take full shape over the course of years until they become an embedded part of a brand reputation.

Changing marketing strategy every year simply isn’t as smart as finding a great strategy and committing to it.

The SoCal Helpful Honda Dealers campaign has evolved over seven years to become one of the most brilliant marketing strategies for a region of dealers working to change their reputation and relationship with their customers – and leverage that hard earned trust to sell more cars.  The only downside is how few others within the Honda marketing and dealer organization seem to realize just how effective this strategy really could be if they adopted and promoted it on a national scale.

3 thoughts on “The Underappreciated Brilliance Of The Helpful Honda Campaign”