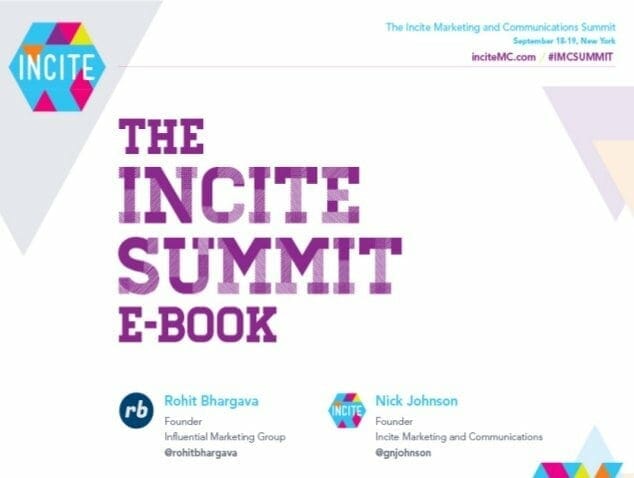 There is a trick that only a handful of the most entrepreneurial wedding videographers know.  Thanks to advances in the speed of video editing technology, the process of editing has gotten much faster.  In response, a select group of talented videographers now promise that they will shoot your wedding, and edit a video version of it that you can play at your reception that same evening.  It’s a real time service that offers surprise and delight.

About two months ago, I started wondering whether that same idea might work at a business conference. 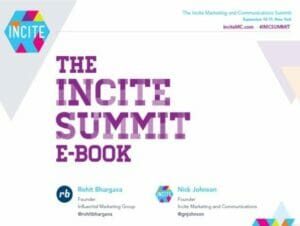 One of the biggest challenges for anyone attending a conference is to pay attention consistently enough to capture notes they can take back to the office and share with colleagues.  It’s probably the most dreaded chore associated with attending any conference.  For the Incite Marketing + Communications Summit these past two days, I worked with the conference organizers to see if we might try an experiment to solve that challenge by taking the same approach as those wedding videographers.

From the stage at the opening of the event yesterday, I promised that during the last session of the conference on Day 2 at 4:30pm – we would present a curated ebook with the top 15 takeaways based on what insights speakers had shared.  That gave us exactly 32 hours to produce the content.  The only problem with that timeline was that we couldn’t start right away because I had to moderate the panels and the speakers had to generate the 15 insights.

So we started taking notes and waiting.  Throughout Day 1 that was our approach.  Then the morning of Day 2 the sessions continued. Finally, at 1pm on Day 2 (today) – we started to put the ebook together.  At 4:30pm (ok, maybe a few minutes after) – we announced the ebook from the stage and posted it onto Slideshare.  It’s currently available on Slideshare for download (and embedded below), as well as featured as one of Slideshare’s “Featured Presentations Of The Day.”

Want to know how we did it?  Scroll to the bottom of this post to see …

How To Write An eBook In 3 Hours:

When it comes to getting a project like this done, preparation is the biggest thing you need.  You could get everything done in just three hours, but the result will generally be far lower quality without taking the right early steps.  For us, there were five real keys to making this ebook happen and publishing it on time from the stage during our live session:

Given the fast schedule for launch, you may find a point that isn’t quite right or something you’d like to comment on.  If you do, please share it as we will be making another update to the ebook in the coming week.  In the meantime, enjoy the insights from the speakers of the Incite Marketing and Communications Summit.  I am sure you will learn something from their insights, as I did from writing this ebook.