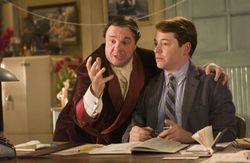 Yesterday's NY Times featured a cover story about an increasingly common problem of turnover that many Broadway musical productions are facing. As more and more of these shows feature recognizable star actors as headliners like The Producers with Nathan Lane and Matthew Broderick, they run into the inevitable problem of trying to keep the production going without the stars who have become "irreplaceable" in their roles.

Some shows manage to keep up the buzz by replacing one star with another, while others fail because the show was too closely bonded with the actors who brought it to life. I started thinking about this distinction because it is a challenge that keeps many organizations awake at night when considering their efforts in social media as well.

To use social media effectively, you often need to foster the individual talents of employees who have a natural ability to use these tools and may be actively using them in their own personal lives. These are the individuals who frequently start social media innovation within the companies where they work. So what happens when they leave?

Having seen this happen at several organizations, there are a few case studies that I would point to as demonstrating the 3 different ways that companies can deal with this situation of having a vocal and public social media figure leaving their organization for any reason.

Each of these are valid ways to deal with the challenge of having a social media super star leave your organization. More importantly, don't let a fear of this situation keep you from embracing the emerging stars and "accidental spokespeople" within your organization who have a genuine passion and desire to share their insights with the world. They can be one of your best assets – and it's not the end of the world in case they do eventually decide to leave.

10 thoughts on “How To Replace A Social Media Super Star”