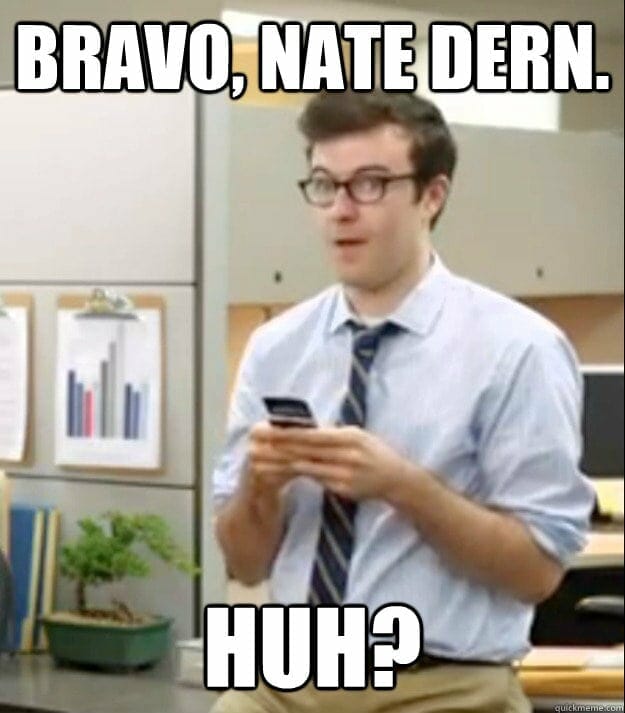 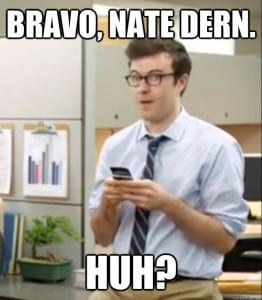 For Nate Dern, the unlikely path to acting micro-stardom would come from a simple three letter catchphrase that most people would barely consider a word. As the artistic director of the Upright Citizens Brigade Theater in New York and a sociology PhD student at Columbia University, Nate had spent years auditioning for different roles. In late 2011, he landed a gig acting in a national commercial for AT&T Wireless called “Responsibilities.”

In the ad, a manager-type character dishes out unexpected responsibilities to his team because with their new Blackberries, they can “do more faster.” He tells one worker to upload more pictures of her baby to YouTube. He tells another to make sure and check in everywhere he goes on Foursquare. And he tells the character played by Nate Dern to keep updating his fantasy team – to which Nate replies “huh?”

It’s a funny ad and rapidly went viral on YouTube racking up several hundred thousand of views in a matter of hours. The source, however, for the majority of the early traffic was a site that no one would have expected: Reddit.com. Reddit is an online link sharing forum mostly used by geeks talking about technology. So why was a community for techies driving hundreds of thousands of views of a funny AT&T ad?

It turns out that one of the active members of that Reddit community was Nate Dern – and as the commercial first aired, he posted this simple message on the community:

“Hi Reddit. After three years of auditioning, I booked my first commercial. I say “Huh?” in this AT&T spot. Just wanted to share.”

Suddenly it wasn’t just an ad for AT&T – it was a mainstream appearance by one of their own, and Reddit users clicked on the link en masse to support Dern. The ad went viral. Looking back, the reason for this effect stems from a simple human truth. We support people we know and make decisions based on personal connections. This insight goes far beyond explaining viral videos. It explains why and how we forge friendships. It drives business deals and alliances. And it may even hold the key to the future of the entire arts industry.

Hundreds of years ago, the only way that most artists could support themselves and find a platform from which to share their talents was through an association with some sort of wealthy benefactor. Almost all of the most well known artists from previous centuries whose art we still enjoy today relied on this sort of personal connection to the wealthy in order to fund their creations – whether it was painting or drama or music.

Today is not so different. Fundraising is a staple of most arts based organizations, as selling tickets to patrons rarely raises enough funds to support most organizations. And so in response, many organizations spend a lot of time trying to shift belief. The shared mantra seems to be: “if we just got people to believe in the arts, then our problems would be over.” The good and bad news is, belief is not enough. Many people already do believe in the power and importance of the arts. Probably more people than you think. The problem is converting belief in the value of arts into tangible action to support them.

Just because someone loves the theater doesn’t mean they will go online, spend their money to buy and ticket and show up. But there is a solution to this problem – and it has a lot to do with the “huh effect” that AT&T experienced thanks to Nate Dern’s fellow Redditers who supported him and his work.

When someone has a personal connection to the director – or if they know someone who worked on the production, or you took them behind the scenes of what you are doing and offered them some sort of exclusive access – of course they will show up. And they will bring their friends too. It’s why high school theater productions always have a packed house. If you have a kid in a show, you’ll be there no matter what.

Of course, the counterargument is clear: we can’t always have that deep level of personal connection with everyone, can we? Luckily, there are plenty of ways to add the human element to create a deeper bond with your potential audience that makes it far more likely they will actually show up when you want them to, and help support you when you most need it. Here are just a few ideas on how to make this happen:

There are plenty of examples of these suggestions already making their way into the Arts community. For example, music institutions like the San Francisco Symphony and the Dayton Opera are setting aside “tweet seats” where patrons can share their live experiences through a virtual channel. Museums are creating augmented reality experiences, while The Smithsonian has also been pioneering the use of mobile technology to make exhibits more engaging.

Each of these examples taps our natural human desire to share experiences. We may not understand it, or even approve in some cases (Twitter in a symphony, really?) – but the past, present and future of arts has always depended on sharing experiences.

On some level, it is our shared experience that inspires most art in the first place. So as you spend your days planning for your next unforgettable production, groundbreaking exhibit or innovative experience … don’t forget the awesome power of the people behind it. They are the ones who can truly bring it to life, if you encourage them to. Even if it is nothing more than a three letter word.

NOTE:  This article originally appeared in the print edition of the ARTSLink magazine and is part of the Arts Marketing Blog Salon this week on ARTSBlog from the Americans for the Arts.  Rohit will be a featured keynote speaker at the upcoming National Arts Marketing Conference in November, 2012.