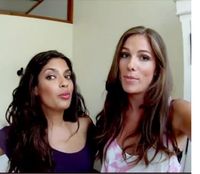 About two weeks ago, Levi's creative team in Australia hatched what seemed like a brilliant campaign stunt idea to promote the Levi's Curve ID jeans for women. They hired two models from New Zealand, equipped them with an "ass cam" that would tape people watching them on the street and sent them out in LA to just walk around. Predictably, they did end up capturing men and women checking out their asses [link to the video below as posted on Creativity Magazine's website, in case the video below gets removed] – the whole thing went viral on YouTube and in less than two weeks it rose to more than 7 million views.

The reviews of the video ranged from early admiration to later criticism when it was revealed that Levi's was behind the video … a fact that is clearly missing from the video itself. Mary Elizabeth Williams, a staff writer for Salon had a particularly entertaining article about it: 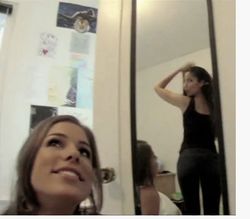 "Levi's may yet pull some genius, sales-inspiring sequel out of its shapely butt here, but right now, the ass cam seems a grand example of how garnering millions of page views does not in and of itself constitute an effective advertising campaign. Instead, it just looks like a sneaky trick, one whose message boils down to "If you wear our pants, ugly guys dressed up like Jesus will stare at your caboose." Got it, Levi's. Message received. You're a bunch of asses."

The story doesn't end there, however. As of right now, the "rear view girls" have been taken off of YouTube … probably because it features lots of people who are recognizable and were taped without their knowledge looking pretty foolish (especially that lady on the escalator). Ultimately, this will likely end up just a huge missed opportunity for Levi's. The concept of an ass-cam capturing stares to sell a pair of jeans that make your ass look great isn't a bad concept.

In this case, it was the sneaky integration of the brand that ultimately undermined a great creative concept. The fix would have been simple … for Levi's to take credit for the campaign in the "behind the scenes" video that they also produced.

A great mystery needs to have a great reveal attached to it. When we find out the butler did it in a mystery novel, we are satisfied. Hiding that fact makes us all feel like we've been tricked, and as Williams said, just makes the people behind the whole thing look like asses.