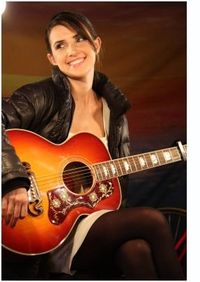 Ana Free is a singer and songwriter from Portugal who started her career with a simple idea. For the past three years she has been recording herself in locations ranging from her bedroom to regional concert stages singing cover versions of popular songs and her own original compositions accompanied by just her guitar and posting those videos on YouTube. Alone, that doesn't seem like anything countless other singers might have tried to do, right?

The difference is that this collection of simple videos on YouTube has gathered more than 20 million views and brought this relatively unknown singer fans from around the world – including more than 20,000 on Facebook. She was recently featured in a music video from the band Hands On Approach and self released her own album last year on CD Baby.

In a world where the music industry seems to face a new struggle almost every month and many in the music industry fear that the next generation of consumers are growing up with a perception that music is something that they should not have to pay for – what could Ana Free teach us about marketing, engagement and the potential future for up and coming musicians around the world? Here are a few lessons: