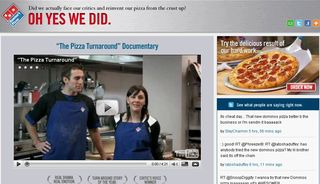 What would you do if you surveyed your customers and they all said you suck? It may seem like a worst case scenario, but companies are faced with this challenge more often than you would think. It is not easy to hear, and in part it is the reason many companies simply don't survey their customers that often. It is easier to look just at metrics like sales or growth and use those to measure success. After all, why bother to ask customers what they really think if you are making money? The problem with this logic is that it doesn't help you to spot threats to your business and plan for the future. Making money is a temporary state … and one that can be more fragile than you realize.

For Domino's, their business has been built not on the quality of their food but on the promise of their service. Anywhere in America (and many other parts of the world), you can pick up the phone, order food and you will get it delivered to your house in 30 minutes or less. This convenience spurred a growth rate for the brand that made it (at one point) the fastest growing franchise in the world. The only problem was, people thought the pizza tasted like cardboard. This was one of only a few revelations that were revealed through some customer surveys and testing the brand completed.

Usually, the only way I would have known about something like that is by working on the brand or having been part of the surveys. In this case, I know the same way that you might … because Domino's has been featuring these testimonials as part of their new "Pizza Turnaround" advertising campaign:

As someone who has written often about authenticity and personality in business, I love this campaign. It uses real Domino's employees as spokespeople, talks about how much they care about their product (and how hurt they were to hear criticism such as their sauce tasting "like ketchup.") More importantly, it offers a backstory on how the brand is trying to be different and delivers it in a believable way. The microsite they created even features a live Twitter stream of conversations mentioning their new Pizza, including both good AND bad reviews right on their homepage. 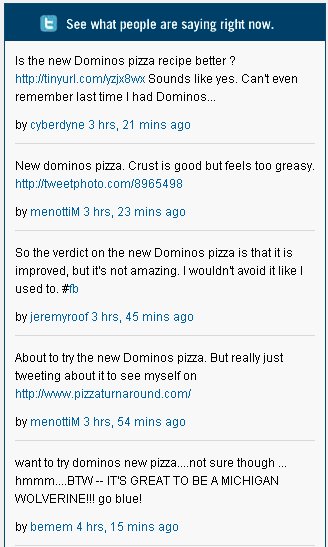 While the reviews, which are pulled directly from Twitter, are mixed – the message from Domino's is clear: we listened to our customers, improved our product and now we stand behind it. One recent tweet they featured (unedited) on their homepage said "tried new dominos pizza with the cheesy base, it sucks, too much cheese means a change of shirt and way too sickly."

Whether or not you like their new pizza, you have to appreciate a brand that is willing to stand behind their new product so much that they can allow direct criticism on their own site without feeling the need to shut it down. Despite having some negative reviews, if you look at the conversation both on their Facebook site and on Twitter – the majority of conversations either share a positive review, or an intent to try the new pizza. There are, as usual, a small minority who are pleading to have the old pizza back (which have been met with the mocking suggestion to spread ketchup on the box to recreate the old pizza) – but the new pizza is clearly winning many fans online.

The real lesson to watch for anyone in marketing, though, will be how Domino's weathers the negativity in a campaign like this where they put their customer's thoughts and opinions front and center. It's a bold experiment in actually standing behind your product and letting people have their own opinions about it.  If it works, perhaps we'll see more brands willing to take this approach.

10 thoughts on “Can Domino's Turn Around Their Cardboard Reputation?”