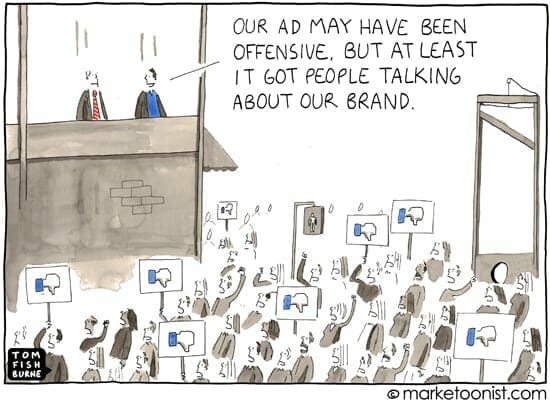 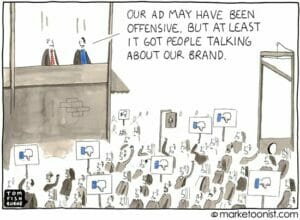 Lots of people who don’t work in public relations will tell you that “all PR is good PR.” In other words, if people are talking about you – it doesn’t matter what they are saying. Then there are those who are in the profession who will usually tell you the exact opposite … that PR can be positive or negative and you need to focus on improving your reputation above all else. Who is right?

The problem is, they both are … in the right situation.

The Challenge of Obscurity

If you are trying to launch an unknown brand, you have the challenge of obscurity. No one has heard of you and what you are trying to sell or provide. There is a natural barrier to your message getting out there, because there is lots of noise to compete against. In that sort of environment, just getting ANY attention is usually a good thing. The more people share your name and talk about your brand, the better off you are.

Brands with the obscurity challenge need to focus on getting noticed.  So using guerrilla marketing or big stunts to attract attention can work. Flash mobs to introduce a product or holding up crazy signs or dressing in silly costumes at a large event can get coverage. You might call this the “Go Daddy Strategy.” In the early days of the Super Bowl, Go Daddy reached a national audience by creating over the top ads that were banned from airing on television because they were deemed “too racy.” So the online domain seller drove people online and introduced themselves to the market as THE PLACE to buy domain names. Every year after the Super Bowl, their guerrilla marketing stunts worked so well, they typically lead to record sales days. The PR may not be good, but it works.

For years, all PR was good PR for Go Daddy.

The Challenge of Reputation 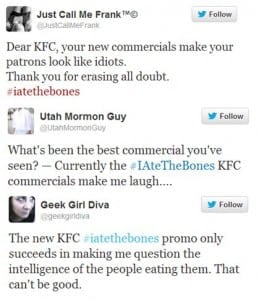 On the other hand, if you have an established brand that everyone has heard of – you have the challenge of reputation. The most important thing isn’t introducing your name to the world, it is changing or maintaining your reputation to be a positive one. Many brands with this challenge resort to measuring the value of their PR based on the volume of coverage they get. But measuring media clips every month doesn’t work anymore, because simple mentions of brands in media aren’t enough anymore.

Brands with the reputation challenge need to focus on measuring sentiment. And as soon as you start to focus on sentiment, the “all PR is good PR” argument is flawed. Simply getting people to talk has little value because your brand is already known. What matters more is WHAT they are saying about you. The ultimate example of how this works is something we could call the “KFC Strategy.” 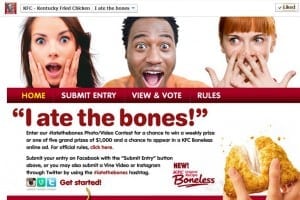 In the early 90s, the fast food brand Kentucky Fried Chicken decided to rebrand to KFC in response to growing negative media pointing to fried chicken as an unhealthy food item. They changed hardly anything on their menu, choosing instead to “solve” their problem with a rebrand. For years, they continued to be criticized. Recently, their new campaign “iatethebones” was created to launch their latest “innovation” – boneless chicken with the same famous original recipe. The campaign has been getting mixed reviews, some good PR and some bad.

The larger problem is that the brand has seen a huge 36% drop in sales due to a combination of the Avian Flu crisis and reliance on foreign sales in China to compensate for “a tale of eroded market share, bankruptcies, and franchisee lawsuits,” according to BusinessWeek.  A catchy new tagline and contest is driving some PR … but the long term value to the brand will be minimal.

In what may seem like the biggest irony, the answer for how to contrast the good PR with the bad may actually come from the very brand that started by focusing on creating controversy at all costs: Go Daddy.  Several months ago I wrote a post about how Go Daddy may offer the perfect lesson for brands on how to grow up.  It was an unpopular way to look at the value of their longstanding sexually charged advertising. But it does point to the real truth when it comes to the value of positive or negative PR … that it works best as an evolution.

In other words, believing in the old adage that all PR is good “as long as you spell the name right” only works until they already know how to spell it.