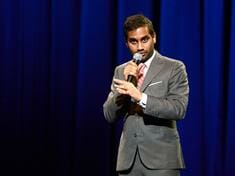 Aziz Ansari wasn’t planning to stick around after his show for photos. Most of the people in the packed theater in Washington DC where I saw him perform his Buried Alive Comedy Tour last week probably weren’t expecting that anyway.

Despite social media breaking down virtual barriers to conversations with unreachable people (and Aziz has plenty of them with more than 2 million Twitter followers), in real life – most people understand a level of unapproachability in our celebrities. Aziz can’t give 20,000 people a hug.

When he took the stage last week, though, he started with an unusual request. “They said you can’t take photos or videos – but I know what you’re thinking … if I don’t take a photo – how will people believe I was here?” Sadly true for the generation of oversharers in the audience. So he offered us all a 30 second free pass – to take photos, videos, tweet, Facebook, Foursquare or whatever we wanted.

Of course, hundreds of people in the audience took the opportunity.

More than that, we all felt like we had the chance to break the rules. Giving us permission to share instead of being sneaky made it even more desirable to do – even if it was pretty clear all that sharing actually helps Aziz promote his show. That simple choice reminded me of two lessons we often forget:

Sometimes you explicitly tell them not to (like in a theater), but more often people assume that sharing may not be allowed and so they don’t do it – or end up sharing in a sneakier and lower quality way. To solve this problem, reconsider whether you actually do need to ban sharing, or if you’re holding onto an outdated policy for tradition’s sake.

2. People love a good cop – as long as there is a bad cop close by.

The real power of Aziz giving us permission to take photos came from the fact that there was someone before him who specifically told us not to do it. Offering a sympathetic alternative to the “don’t do it guy” created a bond with us (the audience). He respected us, and we responded by respecting him back.

So the next time you have an opportunity to invite your customers to share, or ban them from doing it … consider giving them a chance to share. Even if you only have 30 seconds to spare.